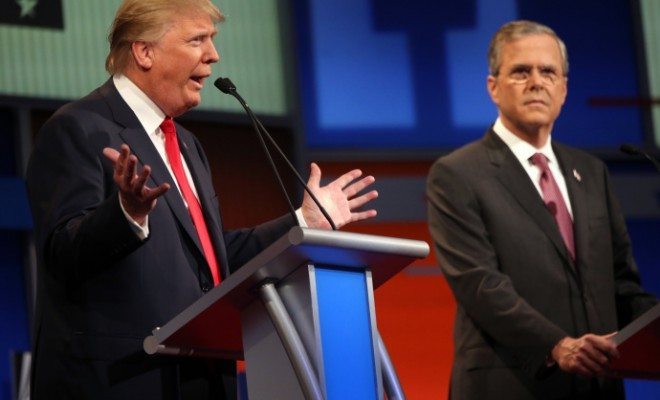 Political Feud of the Week: Donald Trump and Jeb Bush Argue over 9/11

For Donald Trump and Jeb Bush, this 2016 primary has been marked by a lot of animosity. But they appeared to take that feud to a whole new level today, as they sparred back and forth on Twitter over George W. Bush’s 9/11 record.

This particular period of the Trump-Bush feud began when Trump was asked by Bloomberg about how he would deal with being President in the face of a crisis, such as a natural disaster, or a terrorist attack like 9/11. Trump criticized the leaders who have presided during past American crises, by saying:

I think I have a bigger heart than all of them. I think I’m much more competent then all of them. I mean, say what you want, the World Trade Center came down during his time.

He then continued to condemn Bush by saying: “He was president, O.K.? The World Trade Center came down during his reign.”

The fact that Trump essentially blamed the events of 9/11 on George W. Bush sat very poorly with Jeb Bush–and the younger Bush and current presidential hopeful took to Twitter to confront Trump about it. He tweeted:

How pathetic for @realdonaldtrump to criticize the president for 9/11. We were attacked & my brother kept us safe.

Trump, who’s pretty consistently willing to get into Twitter spats, responded in turn:

.@JebBush, At the debate you said your brother kept us safe- I wanted to be nice & did not mention the WTC came down during his watch, 9/11.

No @JebBush, you’re pathetic for saying nothing happened during your brother’s term when the World Trade Center was attacked and came down.

.@JebBush, like it or not, our country needs more energy and spirit than you can provide! #MakeAmericaGreatAgain

That’s where the fight appeared to end–for now at least. Given the clear personal animosity between the two candidates, these issues will probably come up again. Trump has been a consistent critic of George W. Bush, and during the second GOP debate, brought up George W. Bush. He stated: “Your brother and your brother’s administration gave us Barack Obama because it was such a disaster those last three months.” Bush responded: “You know what? As it relates to my brother, there is one thing I know for sure, he kept us safe.” Seemingly that is the line Trump was referring to in the first tweet.

The fight itself was just one of many political spats in the long and drawn-out primary. But the fact that it unfolded the way they did–on Twitter–provides an example of a new kind of political discourse that is increasingly defining the 2016 elections. It’s across party lines, as well–this summer, Hillary Clinton and Jeb Bush got into a Twitter/Photoshop war over student debt. Debate is no longer just confined to the stage.

Anneliese Mahoney
Anneliese Mahoney is Managing Editor at Law Street and a Connecticut transplant to Washington D.C. She has a Bachelor’s degree in International Affairs from the George Washington University, and a passion for law, politics, and social issues. Contact Anneliese at amahoney@LawStreetMedia.com.
Share:
Related Items2016 Primary9/11Donald TrumpGeorge W. BushJeb BushTwitter