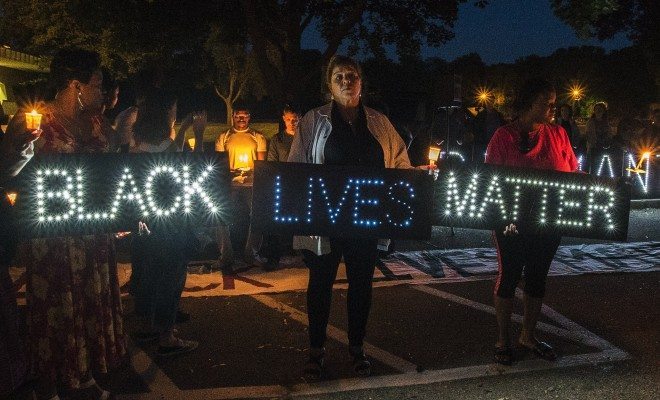 Bernie Sanders and Martin O’Malley both speaking at a Progressive rally: what could go wrong? At the recent Netroots Nation conference, the two candidates were interrupted during a town hall event by protesters who chanted and demanded they discuss racial issues, such as police brutality. While both eventually yielded to the protesters, their responses were not very well received. Despite the disruption, the conference marked an important moment for both the Democratic primaries and the progressive movement at large.

Although progressives openly acknowledge racial issues, it is not emphasized in the same way as topics like income inequality, campaign finance reform, and affordable college tuition. Aside from the fact that race needs to be more directly addressed as a society, candidates should also give it more attention since black Americans are a large and important contingency for the Democratic party.

At Netroots Nation, the protesters eventually forced both candidates to respond to their concerns, but were ultimately disappointed with how general the comments were. After being pressed multiple times, O’Malley eventually stated his belief that police departments should report all police related shootings and brutality complaints, also noting his support for civilian review boards, a measure that he implemented in Maryland. In his final comments O’Malley stated: “Black lives matter, white lives matter, all lives matter.”

This comment was met with boos and disapproval from protesters, who reminded the former governor that the “black lives matter” slogan is not to devalue other races; rather, it is to point out the seeming lack of value given to black lives in particular, as evidenced by recent police-related deaths.

I did not understand the tremendous passion, commitment and feeling and depth of feeling that all of us should be attaching to this issue.

Later on it was Sanders’ turn to face the protesters. He responded to cries from the audience saying,

Black lives, of course, matter and I spent 50 years of my life fighting for Civil Rights and for dignity.

After more pressure from the protesters, Sanders addressed concerns with the criminal justice system as well as economic inequality, which he pointed to as the root of the racial issues being discussed. He talked about his past efforts to address racial inequality including implementing community policing initiatives and fighting to include provisions in Obamacare that improve minority health care. The protesters eventually settled and let Sanders continue on to the issue of immigration, which was a big focus of the conference as a whole.

After the event, commentators primarily criticized the protesters’ interruptions. Some referred to the event as a disaster, and others touted it as evidence of great Democratic divides. But many were confused why protesters would attack these two candidates, who generally have solid records on racial issues. Despite their records, however, neither candidate has seemed willing to address race now that they are running for national office.

One likely reason why both candidates have neglected to focus on race is a fear of distancing some potential voters. As a presidential candidate, it is dangerous to focus on problems that are not as salient to the entire populace–especially when you are fighting to gain footing against Hillary Clinton. Issues like income inequality and the influence of money in politics are more general, so it is not surprising that both candidates emphasize those. But these candidates’ failure to confront race does have consequences–both are polling miserably with black Americans. The Netroots conference highlighted the fact that Democratic candidates are largely unprepared to address an issue that has become, and will remain, important for progressives.

Over 70 percent of black Americans are registered Democrats and the party’s presidential candidates have received over 80 percent of the black vote since 1964. But with increased attention given to racial issues in the past couple years, Democratic candidates will need to address racial issues properly in order to mobilize black voters.

O’Malley, Sanders, and even the frontrunner Hillary Clinton have been content addressing race through easy, symbolic issues like the confederate flag and Donald Trump’s comments about Mexicans. This is unacceptable. For these protesters race isn’t just political, it is quite literally an issue of life and death.

The Netroots event was designed to give candidates time to discuss their platform and explain how their overarching views align with the broader progressive agenda, and the interruptions hindered their ability to do so. Yet, while criticism of the protesters is well-intentioned, it is also misplaced. The same criticism was leveled at Civil Rights protests, and more broadly all protests– which, by nature, involve disruption of the polite status-quo.

We also have to remember that rowdy crowds are not foreign to Netroots conferences. During the 2008 election cycle, Hillary Clinton and Barack Obama received uproarious booing and applause for the various policies they proposed. This crowd interaction provides valuable feedback for candidates as they try to appeal to their liberal base.

It’s also interesting that this conference happened on the same weekend that the Ku Klux Klan rallied in South Carolina to protest the removal of Confederate flag and was met with resistance by the Black Panthers–something that sounds like it belongs in the 1960s. This rally is a vivid and sobering reminder that despite much progress, racial issues persist in America.

In a way, this event was a positive experience for both candidates and the Democratic nominees who were not present. They are now keenly aware of the importance of substantively addressing concerns of minority communities if they expect these communities to rally behind them in large numbers. In 2012, the Tea Party was a dominant political movement and when Republican candidates realized this, they made sure to appeal to the group’s cause, for better or for worse. Likewise, movements like Black Lives Matter are important political trends for the coming election season.

The events at the Netroots conference not only bring to light the lack of attention being paid to issues of race by Democrats, but also highlights the continued struggle by black activists to get support from well-meaning, white progressives. These activists are frustrated since progressives are generally concerned with racial issues but have yet to take significant action. This is the result. In their failure to adequately address these concerns, O’Malley and Sanders proved the protesters’ point: the progressive agenda does not adequately address specific issues that affect black Americans and other minorities.

In the wake of the Netroots conference, one blogger commented that at this event “even progressives, sympathetic allies to the Black Lives Matter movement got a tiny taste of what the movement is REALLY about. It’s about having your voice heard and taken seriously.” Those who participated in the protest were aware of this significance. “They all fumbled when we brought black issues to the table,” said one of the protesters speaking on the event–“that was by design.”

Maurin Mwombela
Maurin Mwombela is a member of the University of Pennsylvania class of 2017 and was a Law Street Media Fellow for the Summer 2015. He now blogs for Law Street, focusing on politics. Contact Maurin at staff@LawStreetMedia.com.
Share:
Related ItemsNetrootsO'MalleyProgressiveSanders