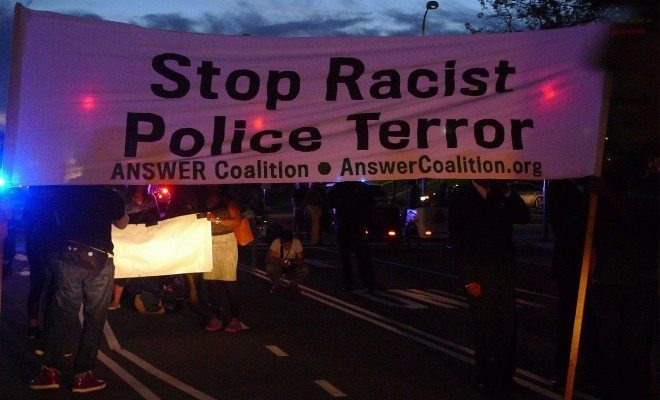 Martin O’Malley Misses the Mark on This Big Issue

At Governor Martin O’Malley’s announcement for the Democratic presidential candidacy this previous Saturday, there were numerous protesters carrying signs that read “NOMALLEY” and “Stop killer cops.” Instead of receiving Maryland’s support for the presidential bid, there were scant supporters and numerous protesters. Despite this lukewarm reaction, O’Malley laid bare his grand plans for immigration reform, the LGBT community, and leveling the economic playing field. But O’Malley has remained silent on one message that resonates with Baltimore in particular and with millennials everywhere–police brutality.

O’Malley looks pretty good on paper. He ended the death penalty, legalized same-sex marriage, and passed the Dream Act in Maryland. But his reaction to crime in Baltimore some 15 years ago as mayor has provoked mixed responses. On one hand, O’Malley dramatically reduced drug violence and homicide in Baltimore. But on the other, he adopted a zero tolerance approach to crime that some claim has sparked the protests resulting from Freddie Gray’s death.

One of the largest criticisms of O’Malley’s actions as mayor was the number of arrests sky-rocketing to 108,447 in 2005, amounting to about one sixth of the Baltimore population. The main reason these arrests were controversial is because many resulted from petty crimes. In addition to more arrests, O’Malley also implemented CitiStat, a data-tracking management tool that holds government employees accountable for their actions. CitiStat allows the government to gather data on an array of performance indicators, such as response time or employees who do not come into work. CitiStat was originally on track to monitor weekly issues, such as domestic violence and felony gun arrests. But this monitoring abruptly stopped and the employees working on these issues were sent a stream of meeting cancellations. This abrupt change has led some to claim that this tool disproportionately targets minorities and women.

O’Malley’s popularity among Marylanders varies; there are those outspoken enough who chose to protest his announcement and there are others who show their unrelenting support. In terms of approval ratings, O’Malley recently saw 47 percent approval, but also 47 percent who actively disapprove of him.

In the national playing field with Bernie Sanders and Hillary Clinton, O’Malley is clearly trailing behind. Clinton epitomizes traditional Democratic Party values and relies on old money and name recognition in order to garner support for her presidential bid while Sanders appeals to the liberal, left wing population vying for reform and dramatic change. O’Malley, however, falls somewhere in between. O’Malley seems to be anticipating an equivalent political field to the 2008 Democratic presidential race when Obama rose to the challenge in victory. O’Malley is hoping to fill the moderate vacuum between Clinton and Sanders by presenting himself as a liberal alternative to Clinton who is not quite as radical as Sanders.

But O’Malley has avoided taking any prominent stance on police reforms or police brutality, as seen on his website for his presidential campaign. He hits his major points regarding income inequality in America and touches on a few gender-related topics, but the closest he gets to police brutality is mentioning the need for accountability of our governments.

O’Malley’s rhetoric regarding Freddie Gray’s death is sympathetic, but he guides the discussion of police brutality away from race or policing by emphasizing “the scourge of hopelessness in America’s cities.” O’Malley resorts to numerous tactics to avoid the issue of institutionalizing police brutality and militarization, such as ignoring the problem in his presidential bid announcement and not featuring crime or violence on his website. This could ultimately lead to the downfall of his campaign.

When comparing O’Malley to Sanders, Sanders has already taken a firm position against police brutality. Sanders immediately recognized the problem within the United States when police departments are treated as militaries. Likewise, Clinton has taken a similar stand in calling for reforms in police departments so African Americans are not disproportionately targeted. Contrarily, O’Malley has said little to nothing.

O’Malley’s silence on police brutality speaks volumes to the actions he is willing to take in reforming the police system. His silence is blaring, especially considering his previous position as the mayor of Baltimore. This omission, in addition to his lack of support from Marylanders puts his entire presidential bid on shaky ground. His chances of winning over Sanders and Clinton seem almost nonexistent if he is not willing to speak out against police brutality as his opponents have done.