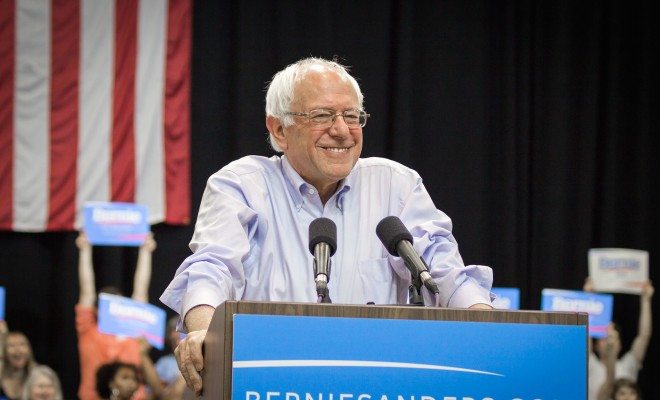 Bernie Sanders, presidential hopeful and Independent senator from Vermont, just won Time’s poll for “Person of the Year.” The poll is a separate feature from the magazine’s own choice, but does shed a light–although an imperfect one–on current American opinion and zeitgeist.

Sanders garnered just over 10 percent of the vote, the only choice to make double digits. Malala Yousefi came in second, at just over five percent. Pope Francis, President Obama, and Stephen Colbert received 3.7, 3.5, and 3.1 percent respectively–“refugees” were at three percent.

Sanders’ win is impressive, and it’s representative of the fact that he’s certainly had an amazingly influential year. His entrance into the 2016 Democratic primary shook up what many thought was going to be an open-and-shut victory for Hillary Clinton. Although Sanders still trails Clinton in the polls, his campaign is going strong, and he continues to attract fans.

In addition to Sanders’ win, there were some other noteworthy facets of the Time poll. One of the strangest options on the list was American Pharaoh, the first horse to win the Triple Crown since 1978, with 1.4 percent of the vote. But that’s actually a pretty strong showing compared to most of our presidential candidates. Carly Fiorina had .6 percent of the vote, and Ted Cruz and Jeb Bush each had .5 percent. Ben Carson fared a little better at 1.1 percent, as did Marco Rubio. Hillary Clinton was at 1.4 percent. That’s right, a horse either beat or tied six of our presidential candidates in Time’s poll for most influential person of the year.

But, despite the fact that Bernie Sanders won the poll, he’s not actually in contention to be Time’s person of the year. That short list has been disclosed by Time, and includes Abu Bakr Al-Baghdadi, the ISIS leader; Black Lives Matter activists; Caitlyn Jenner; Travis Kalanick, Uber’s CEO; Angela Merkel, Vladimir Putin, Hassan Rouhani, and Donald Trump. It should be noted that Donald Trump is particularly qualified, given that he beat American Pharaoh by an impressive .4 percent on the online poll.

Time defines its criteria for choosing the person of the year as “the person TIME believes most influenced the news this year, for better or worse.” Time won’t disclose its choice until Wednesday morning, and it will be from that short list. Meanwhile, I’ll be rooting for #AmericanPharaoh2016

Anneliese Mahoney
Anneliese Mahoney is Managing Editor at Law Street and a Connecticut transplant to Washington D.C. She has a Bachelor’s degree in International Affairs from the George Washington University, and a passion for law, politics, and social issues. Contact Anneliese at amahoney@LawStreetMedia.com.
Share:
Related Items2016 PrimariesAmerican PharaohBernieBernie SandersHillary ClintonPerson of the YearPope FrancisSandersStephen ColbertTIME