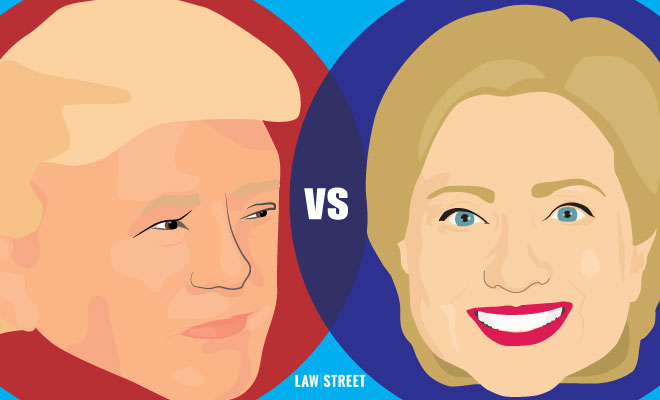 After the first presidential debate broke records as the most watched debate in U.S. history, expectations for Hillary Clinton and Donald Trump’s second showdown at Washington University in St. Louis were high. Here are five of the most buzzworthy moments from the second presidential debate:

You Know They Had to Talk About The Tape

Going into the second debate, we knew Trump was going to be confronted with questions about the 2005  recording where he was heard speaking vulgarly about women with then “Access Hollywood” host Billy Bush. CNN’s Anderson Cooper wasted no time bringing it up saying, “You’ve bragged that you sexually assaulted women,”  before asking the Republican nominee to explain his actions. Trump responded by saying repeatedly that it was just ” locker room talk” and deflected the conversation to ISIS, Clinton’s emails, and Bill’s past discretions.

Clinton responded by saying that the video and Trump’s attacks against the Khan family, a Hispanic federal judge, President Obama, and a reporter with a physical disability definitively show that he’s not fit to be president. “He owes the president an apology. He owes our country an apology.”

That video represents exactly who Donald Trump is.

Like the first debate, viewers continued to be distracted by Trump’s constant sniffling. While the source of his nasal woes is still unclear, people couldn’t help but speculate about the cause.

#Debate: @realDonaldTrump seems a lot more calm, although his sniffling hasn’t gone away.

Is Trump going to blame the sniffling on his mic again? #debate

When addressing Clinton, Trump said that if he wins, “I am going to instruct my attorney general to get a special prosecutor to look into your situation,” in response to her private email server use while serving as Secretary of State. Clinton responded by saying viewers should fact check his falsehoods, and that it’s a good thing Trump isn’t in charge of our nation’s laws. “Because you’d be in jail,” shot back Trump, followed by cheers from the audience.

It’s not unusual to see presidential candidates interrupt the moderator to get their points across, but this time it was excessive. Trump accused the moderators of teaming up against him and favoriting Clinton.  “It’s one-on-three,” muttered Trump. In fact, ABC’s Martha Raddatz had just asked Clinton about her emails. “We brought up the emails,” Cooper responded.

The Candidates Had to Say Something Nice About Each Other!

After attacking each other’s policies, personal lives, and scandals for an hour and a half, the candidates were asked to close out the debate by naming one positive thing they respect about one another.

Clinton went first, saying that she admires Trump’s children. Trump closed out the debate saying, “She doesn’t quit, she doesn’t give up. I respect that. I tell it like it is. She is a fighter.”

Aww maybe there is hope that they can one day be friends. Or not.

Alexis Evans
Alexis Evans is an Assistant Editor at Law Street and a Buckeye State native. She has a Bachelor’s Degree in Journalism and a minor in Business from Ohio University. Contact Alexis at aevans@LawStreetMedia.com.
Share:
Related Items2016 Presidential ElectionAnderson CooperDonald TrumpElectionsEmailsHillary ClintonMartha RaddatzSexual AssaultSniffilingUniversity of NevadaVideo