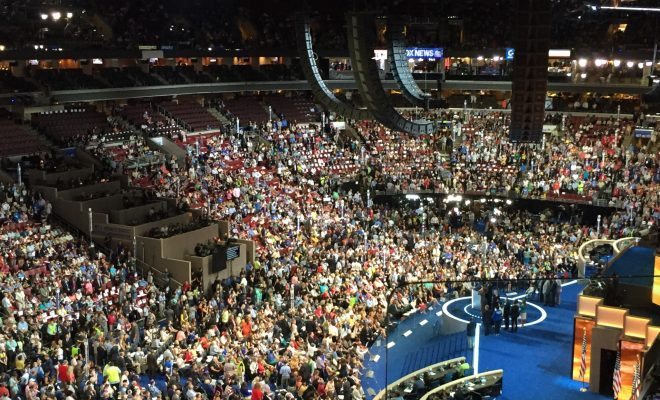 What’s up at the DNC?: Law Street’s Day 2 Coverage

Here’s a look at the second day of the festivities, courtesy of Law Street reporters Alexis Evans and Anneliese Mahoney:

There was a Gender Neutral Bathroom, Without Any Fuss

Given all the of the hubbub about gender neutral bathrooms in the U.S. this past year, it was a nice “f you” to the GOP to see a gender neutral  bathroom at the DNC.

I’m kidding. It was just a bathroom.

Have you ever wanted to see a bunch of adults–some of them famous and important politicians–grin and recite fun facts about their states? If your answer is yes, look no further than the roll call vote held today. DNC Secretary Stephanie Rawlings-Blake, who is also the Mayor of Baltimore, asked each state and territory (in alphabetical order) to cast their votes for either Hillary Clinton, or Bernie Sanders.

Some delegates had passionate messages for the group assembled, like DC’s Mayor Muriel Bowser, who used the moment to rally for DC statehood.

And Bernie Sanders’ brother, Larry Sanders, spoke for the Democrats abroad. He currently resides in the UK and is affiliated with the Green Party of England and Wales.

An emotional Larry Sanders cast a vote for his brother Bernie at the DNC: https://t.co/QwxtEQFo8lhttps://t.co/PqAP5Bz5dw

#DemsInPhilly even if this roll call serves no real purpose other than being endearing, it’s certainly changed the mood in here.

Hillary Clinton made history today. She is the first woman to be nominated for president of the United States by a major party.

But Not Everyone was Happy

As we moved through the roll call vote, many Sanders supporters decided to show their frustration by staging a walkout and then sitting down in the media tent. For a look at the protest, check out Law Street Media’s coverage here.

Mothers of the Movement Moved Arena to Tears

While the Bernie sit-in was still underway inside and outside of the media tent, the crowd inside the arena erupted into chants of “Black lives matter” as the Mothers of the Movement–a collection of black women whose children had been killed in police shootings or by gun violence–took the stage to endorse Hillary Clinton and share stories of their slain children.

This is a pretty profound moment. The “Mothers of the Movement” on stage at the DNC. pic.twitter.com/SrMyPOSGms

Fulton dismissed concerns that the women were being used by the Clinton campaign as political pawns saying:

This isn’t about being politically correct. It’s about protecting our children. That’s why we’re here tonight with Hillary Clinton. And that’s why, in the memory of our children, we are imploring you — all of you — to vote in this election.Hillary is the one mother who can ensure our movement will succeed.

‘This isn’t about being politically correct’: Watch Trayvon Martin’s mother make an emotional plea at the DNChttps://t.co/wTZhdtmclK

Former President Bill Clinton officially became the first man to give a first lady speech with a really, really, long retelling of his and Hillary’s love story.

Bill documented what seemed like each year with Hillary including moving Chelsea into college in 1997 and the later events of 1999, but unsurprisingly fast forwarding over 1998’s Monica Lewinsky scandal. All in all Bill’s speech was clearly an attempt to humanize Hillary with voters, and I think he succeeded.

Anneliese Mahoney
Anneliese Mahoney is Managing Editor at Law Street and a Connecticut transplant to Washington D.C. She has a Bachelor’s degree in International Affairs from the George Washington University, and a passion for law, politics, and social issues. Contact Anneliese at amahoney@LawStreetMedia.com.
Share:
Related ItemsBill Clinton Bernie ProtestBlack Lives MatterDay 2Democratic National ConventionDNCGender Neutral BathroomsMothers of the MovementRoll Call