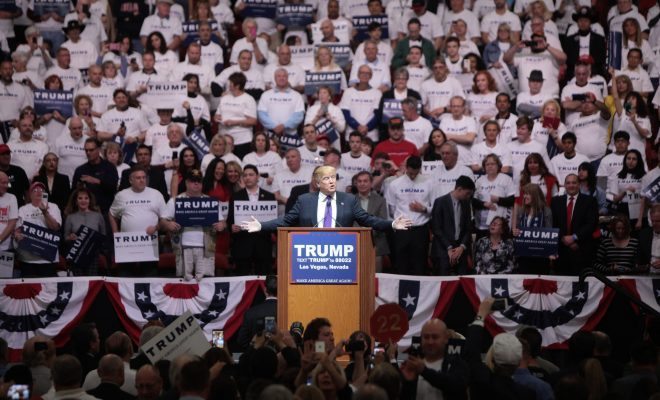 "Donald Trump with supporters" courtesy of [Gage Skidmore via Flickr]

In Sunday’s episode of “Last Week Tonight,” John Oliver massacred the U.S. primary process, calling it the “electoral foreplay we’ve been engaging in since February” and highlighting a video clip of a screaming man at the Nevada primaries.

The system, with both primaries and caucuses, is hard to understand for most people and Oliver did his best to explain it to us. Some states have primaries, some have caucuses, and some–like Washington State–have both. At caucuses people have to physically attend a convention that can take hours, and then vote, traditionally leading to a low participation rate–the Republican turnout for its caucuses in 2012 was a terrible 3 percent.

Take Washington, for example, which Oliver highlights. The state has both primaries and caucuses, but the primaries “don’t count”–meaning the state ignores the primary votes and only counts the caucus votes. Oliver also points out that primary voters don’t exactly vote for a candidate; they vote for which delegates will attend the National Party Convention and then those delegates vote for the candidates on the voters’ behalf.

Oliver went through a case when Trump–“America’s walking, talking brushfire”–won the popular vote but received fewer delegates than the candidate who “got his ass kicked” (also known as Ted Cruz). And as Oliver said, there is no clearer evidence that our system is broken, than when Donald Trump is actually making sense. Trump himself summed up the situation by saying, earlier this month:

“You’ve been hearing me say it’s a rigged system, but now I don’t say it’s anymore, because I won.”

Check out the full clip below:

For more info on the primary process, check out: How do Superdelegates Work? And Why are People so Mad?

Emma Von Zeipel
Emma Von Zeipel is a staff writer at Law Street Media. She is originally from one of the islands of Stockholm, Sweden. After working for Democratic Voice of Burma in Thailand, she ended up in New York City. She has a BA in journalism from Stockholm University and is passionate about human rights, good books, horses, and European chocolate. Contact Emma at EVonZeipel@LawStreetMedia.com.
Share:
Related ItemsCaucusCaucusesDonald TrumpJohn OliverLast Week TonightPrimariesPrimary Elections