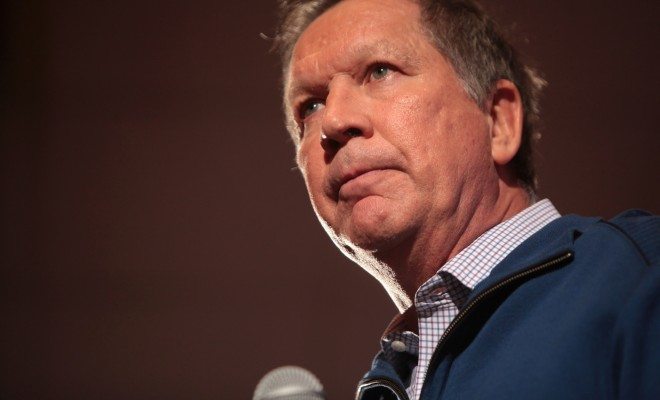 In the context of campus sexual assault becoming more of an epidemic sweeping colleges across the country, one first-year student asked presidential candidate John Kasich how he as president will help women “feel safer and more secure regarding sexual violence, harassment and rape.”

Kasich turned away, making jokes to the audience about how he needs to leave, almost trivializing the St. Lawrence University student’s question.

He responded by explaining the efforts that Ohio has taken to provide support to victims on college campuses, like access to confidential reporting, rape kits, and the opportunity for victims to “pursue justice after you have had some time to reflect on it all.”

He then hit her with a kicker: don’t go to parties with alcohol.

Let’s unpack this statement. First of all, no woman should feel afraid just by simply going to a party with alcohol. If women do, and if telling women not to go to parties is even in the realm of something someone thinks, shouldn’t that warrant some sort of drastic preventative change?

However, Kasich did not address the root issue of how universities and colleges can solve the issue of sexual assault, rather he perpetuated the idea that it can only be prevented if women do not put themselves in situations where they could be sexually assaulted (which really is a wide variety of situations…so should women stop going to school, too?).

Rather than direct this conversation toward precautionary measures, Kasich tried to fix the issue by naming reactionary measures. The suggestions he stated at the beginning are great, but do not actually fix the issue of women (and men) being sexually assaulted in the first place.

A woman should be able to attend college parties totally naked, dance on tables & drink lots of alcohol w/o being raped or assaulted #Kasich

A 2007 study for the National Institute of Justice showed “… the vast majority of incapacitated sexual assault victims (89 percent) reported drinking alcohol, and being drunk (82 percent), prior to their victimization.”

Obviously alcohol does play a role in a lot of sexual assaults, especially on college campuses, but does that mean that one necessarily causes the other? Not quite, according to a report from the National Institute on Alcohol Abuse and Alcoholism.

Women should not be afraid to be around people drinking, period. In addition, alcohol doesn’t rape, people rape. And while it may play a factor, it is not an excuse for Kasich’s comments.

Julia Bryant
Julia Bryant is an Editorial Senior Fellow at Law Street from Howard County, Maryland. She is a junior at the University of Maryland, College Park, pursuing a Bachelor’s degree in Journalism and Economics. You can contact Julia at JBryant@LawStreetMedia.com.
Share:
Related ItemsCollegeCollege Sexual AssaultJohn KasichRapeRepublican PrimarySexual Assault