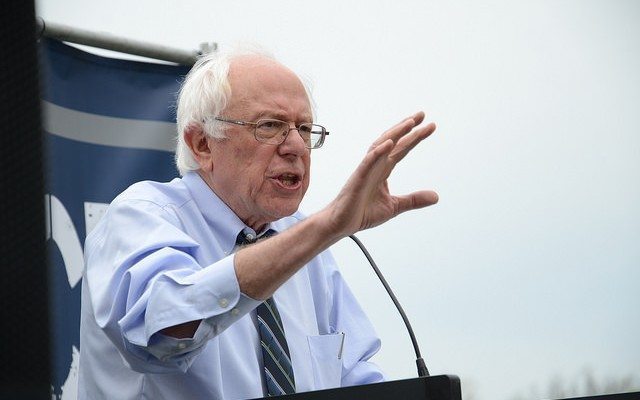 Independent Vermont Senator Bernie Sanders announced that he is running for president as a Democrat in an interview with the Associated Press earlier this week. Sanders, an Independent Senator from Vermont and a self-identified “democratic-socialist,” will seek to represent the left-leaning side of the Democratic Party. While many view his bid for the Democratic nomination as a long shot, he presents the party’s first challenge to Hillary Clinton.

Clinton’s campaign has garnered a significant amount of attention in the media and from her Republican challengers, indeed many headlines this week focused on her speech on criminal justice rather than on Sanders’ campaign announcement. However, having a serious challenger to Clinton in the Democratic primary is something that many party members support. A recent Bloomberg poll found that 72 percent of self identifying Democrats and independents think a primary challenger is good for the Democratic Party. While many may question Sanders’ ability to become a significant opponent to Clinton, he has repeatedly said he is “in it to win.”

Describing yourself as a socialist generally does not bode well in American politics, but many of Sanders’ core issues tend to resonate well with populists in the Democratic Party. Sanders is an outspoken critic of Wall Street and identifies economic inequality as one of the most important issues facing the United States. In his interview with the AP, Sanders said, “What we have seen is that while the average person is working longer hours for lower wages, we have seen a huge increase in income and wealth inequality, which is now reaching obscene levels.”

His opposition to Wall Street and what he calls the “billionaire class” also extends to his desire for campaign finance reform. Sanders actively supports a constitutional amendment to overturn the Citizens United ruling and move toward a public-funding system.

Sanders also has strong appeal among environmentalists as someone who recently voted against the Keystone XL Pipeline, and cosponsored a Senate resolution to acknowledge that climate change exists and is a result of human activity. He has also sponsored legislation that would call for a carbon tax and is a strong proponent of alternative energy. He has a 95 percent rating on the League of Conservation Voters scorecard, which evaluates congressional members’ voting records on environmental issues.

As a self-identified socialist, Sanders stands politically to the left of Clinton and many establishment Democrats. He supports expanding medicare to develop a single-payer system for all Americans and has opposed several free trade agreements. He has vocally expressed his opposition to Trans-Pacific Partnership as well as giving the president fast-track authority to pass it without amendments from Congress. Although he supported President Obama’s executive action on immigration, which protects nearly five million illegal immigrants from deportation, he has also said that guest workers may lead to greater unemployment of American low-wage workers.

On some issues, however, Sanders’ positions are in line with a large portion of Americans, particularly those within the Democratic Party. Sanders voted against the Iraq war, which Clinton initially voted for and later came to hurt her 2008 presidential bid. He is also a longtime supporter of same-sex marriage, an issue that has gained increasing public support and currently has a landmark case in front of the Supreme Court.

While many believe that Hillary Clinton winning the Democratic Party’s nomination is a foregone conclusion, Sanders has shown that he intends to do more than force Clinton to discuss the issues that are important to left-leaning Democrats. That said, he is considerably behind in early polling numbers, campaign organization, and fundraising, which will all present important challenges as he tries to become a legitimate challenger. The 73 year old from Brooklyn says that he can appeal to a wide audience because of his role as the longest-serving Independent Senator in American history.

Sanders says, “I’ve run outside of the two-party system, defeating Democrats and Republicans, taking on big-money candidates and, you know, I think the message that has resonated in Vermont is a message that can resonate all over this country.”