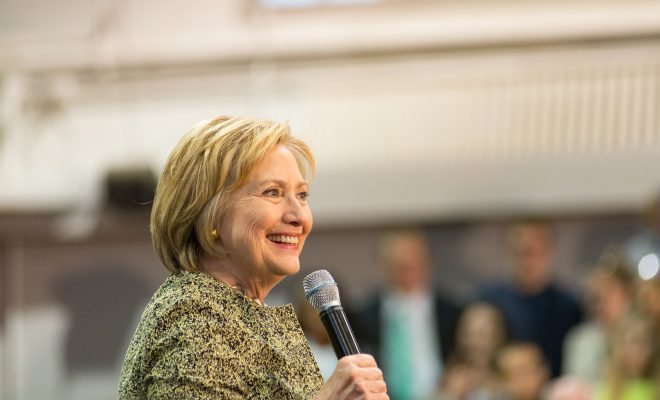 Hillary Clinton is coming under social media fire for a clothing choice she made two months ago. The unassuming tweed jacket she had on during an April speech about income inequality didn’t make any sort of splash that day, or even that month. But now it’s all over the news, after a New York Post article about her campaign’s fashion choices valued that particular Giorgio Armani jacket at $12,495.

According to the New York Post, her stylists have recently aimed for more simplistic outfits, trying not to continue Clinton’s previous trend of wearing brightly colored pantsuits. The idea, apparently, was that a more minimalist approach would draw attention away from Clinton’s clothes, and allow her words to be the focus of discussion. The goal was for people to not talk about her clothes–which is impossible. Hillary Clinton can’t afford to wear the same thing every day, like Trump or Sanders. She has to think about what she wears more than her counterparts because no matter what, it will be a subject of discussion.

This back-to-basics plan may have backfired, as Clinton went from a “Pantsuit Peggy” to an “Armani Alicia.” “Veep” fans might be reminded of Selina Meyer’s attempt to stand on a wooden crate to appear down-to-earth, only to learn that it was reinforced with steel and cost $1,200. But why do we reject expensive items like an Armani jacket? When we criticize wealthy people for making exorbitant purchases, we’re mad at them for having money. Would we prefer they hoard their money like a dragon, not turning their payment into paychecks for the people they purchase from? Is it not enough that Clinton donates hundreds millions of dollars every year? You can be mad at Clinton for any of her policy decisions or Senate votes that you disagree with, but throwing shade her way for buying a jacket is a senseless critique.

While we do know that Clinton’s campaign is spending a lot of money to dress one woman, we don’t know how much she paid for the jacket, or if she paid for it at all. Clinton might have been offered this jacket from a representative at Armani, Clinton’s buyer may have cut a wholesale deal on the jacket, or maybe Hill walked into Bergdorf Goodman, slapped 120 Benjamins on the table, and wore the damn jacket home. Regardless, the $12,000 figure is exorbitant and eye-catching, which is why that’s the number in every story about “Hillary the hypocrite.” But does wearing an expensive jacket invalidate your economic plan? Does having a pricy wardrobe mean you can’t care about bolstering the American middle class?

Tackling income inequality doesn’t involve slapping millionaires across the face, putting limits on their credit cards, and shutting down Giorgio Armani, Bugatti, and Sotheby’s. It involves creating a set of laws designed to raise wages across the country and end corporate tax loopholes. If the plan is solid, it doesn’t matter how you dress it up.