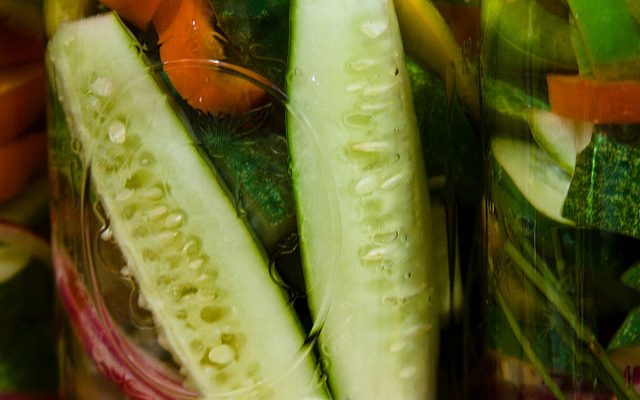 Hillary Clinton stopped by “Jimmy Kimmel Live!” Monday to finally set the record straight on “wacky” rumors that her health is failing–using, of all things, a jar of pickles.

When host Jimmy Kimmel asked Clinton point blank if she is in good health, she offered up her wrist so he could take her pulse, joking “Make sure I’m alive!”

Clinton then sarcastically mocked the baselessness of the rumors that she’s dying, adding, “With every breath I take, I feel like it’s a new lease on life.”

“It absolutely makes no sense,” Clinton said. “I don’t go around questioning Donald Trump’s health. I mean as far as I can tell, he’s as healthy as a horse.”

Kimmel then dared Clinton to prove she’s in good health by opening a jar of pickles in front of the studio audience.

Watch her exaggerated lid twist below:

Clinton also discussed plans to prepare for upcoming debates with Trump saying, “I watched a lot of his debates during the primaries and he insulted all of his opponents, he insulted all the moderators, he insulted, I guess about 80 percent of the American people and the rest of the world.” While she wants to “take it seriously,” she recognizes she needs to also prepare for any “wackiness” by drawing on her experience in elementary school with “pony tail pullers.”

Later during the interview, the topic then shifted to news that the State Department plans to release 15,000 new emails before the debate deadline. When asked if she’s concerned Hillary said, “Jimmy my emails are so boring. And I’m embarrassed about that. They’re so boring. So we’ve already released, I don’t know, 30,000 plus so what’s a few more.”

Kimmel closed out the segment by asking Clinton to pick out Donald Trump quotes from a toupee-topped fishbowl, and try to keep a straight face while reading them aloud. Clinton managed to stay expressionless while uttering a few memorable Trump lines, before finally refusing to read aloud Trump’s creepy comments about possibly wanting to date his daughter Ivanka.

Watch the full clip below:

Alexis Evans
Alexis Evans is an Assistant Editor at Law Street and a Buckeye State native. She has a Bachelor’s Degree in Journalism and a minor in Business from Ohio University. Contact Alexis at aevans@LawStreetMedia.com.
Share:
Related Items2016 Presidential ElectionDonald TrumpHealth RumorsHillary ClintonJimmy KimmelPickles