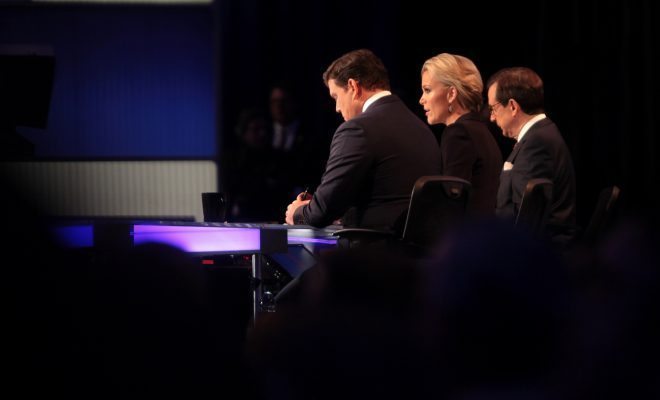 Donald J. Trump makes enemies handily and frequently, dispensing insults more often than insight. It may be a smart publicity move–after all, nothing sells tickets like a historic feud. That’s why Trump’s incendiary comments about Fox News anchor Megyn Kelly, paired with his refusal to participate in a Fox News debate, have garnered world-wide attention.

Kelly represented conservative media taking a stand against Trump’s hijacking of the Republican party, which is why it’s so disappointing to see the two kiss and make up after nearly no effort from Trump to reconcile his former behavior.

This event took place on Tuesday, when Trump sat down with Kelly–allegedly to clear the air. Trump even tweeted in anticipation of the pre-taped event that he was hopeful he would be treated fairly.

I look forward to watching @megynkelly tonight, 8 PM ET. It will be interesting to see how she treats me—I think she will be very fair.

What ensued was a Donald Trump love-fest, in which Trump was offered softball after softball about his family, his love life, and essentially anything but his proposed policies. “Have you been emotionally hurt before?” was actually a question asked to the presumptive GOP nominee, leaving positions such as his “America First” foreign policy undiscussed.

Promoted like a boxing prize fight, the Kelly-Trump interview briefly held Trump accountable for his insulting and demeaning Twitter presence. Trump tried to weasel out of his own words, asking if he had called Kelly a ‘bimbo” before. In one of the special’s rare critical moments, Kelly told him that he had indeed used that word several times.

Trump deflected each criticism lobbed at him, refusing to ever apologize. When asked about his retweet poking fun at Heidi Cruz’s appearance, Trump said “he could have done without it,” but he never let the word “mistake” escape from his mouth.

Kelly, a woman who’d previously held Trump accountable for his misogynistic comments, fell in line with so many other mouthpieces like Ann Coulter, Bill O’Reilly, and Piers Morgan. Essentially she gave Trump free fluff-piece airtime.

I will be live tweeting my interview with @megynkelly on the Fox Network tonight at 8! Enjoy! pic.twitter.com/nlJssZeIWm