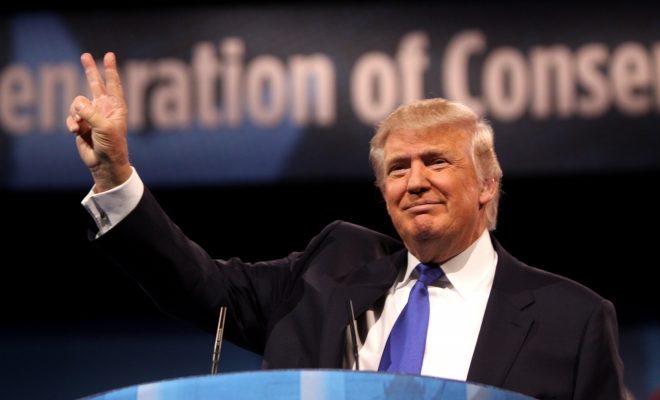 Could Trump Drop Out of the Race?

Donald Trump’s campaign has had a rough week. After the intense backlash surrounding the presidential candidate’s comments about Khizr Khan, followed by his erroneous claims that he saw a video of the U.S. plane delivering $400 million to Iran, and recent reports of discord within the Trump campaign, the latest poll numbers are now showing a widening lead for Hillary Clinton. On top of all that drama, rumors have been flying that Trump may not make it to November.

Trump himself doesn’t seem to be backing down from the fight just yet, and it would be surprising if his ego actually let him. However, ABC News reports that Republican officials are already thinking about his potential replacement if he were to leave the race. Many are even questioning if Trump’s recent actions, which seem to be reckless even by Trump standards, are actually a form of self-sabotage, insinuating that he doesn’t want to run anymore but has too much pride to actually say so.

If Trump ultimately did decide to drop out, the Republican National Committee would have the authority to choose an alternate nominee. The RNC’s official rule on filling vacancies in nominations states the following:

(b) In voting under this rule, the Republican National Committee members representing any state shall be entitled to cast the same number of votes as said state was entitled to cast at the national convention.

(d) No candidate shall be chosen to fill any such vacancy except upon receiving a majority of the votes entitled to be cast in the election.

It is unclear who specifically the RNC would have in mind as a replacement, but it would be tough to find someone to replace Trump’s blend of personality traits and anti-PC opinions that have attracted so many to him. If he were to leave the race, it would be difficult to find a candidate to appeal to both establishment Republicans as well as the unique crowd that Trump has been able to attract.

The list of Republicans who won’t be backing Trump in the general election keeps growing, with many prominent figures even pledging to vote for Clinton. Meanwhile, as his poll numbers fall, Trump has begun commenting on his fears of a “rigged election” in November. If Trump’s support does keep falling, could he drop out just to avoid the humiliation of defeat? Or would he decide to stick it out and blame a loss on factors such as the electoral system itself?

A candidate dropping out of the race is fairly unprecedented; the only person to attempt it was independent candidate Ross Perot, who dropped out for 3 months before re-entering the race prior to the election. However, Trump has run a different kind of campaign, one that hasn’t played by the rules of traditional American politics. Having a major candidate drop out would fit right in with the unpredictable atmosphere of this insane election year.

Mariam Jaffery
Mariam was an Executive Assistant at Law Street Media and a native of Northern Virginia. She has a B.A. in International Affairs with a minor in Business Administration from George Washington University. Contact Mariam at mjaffery@lawstreetmedia.com.
Share:
Related Items2016 ElectionDonald TrumpRepublican PartyRNCRoss PerotTrump Campaign