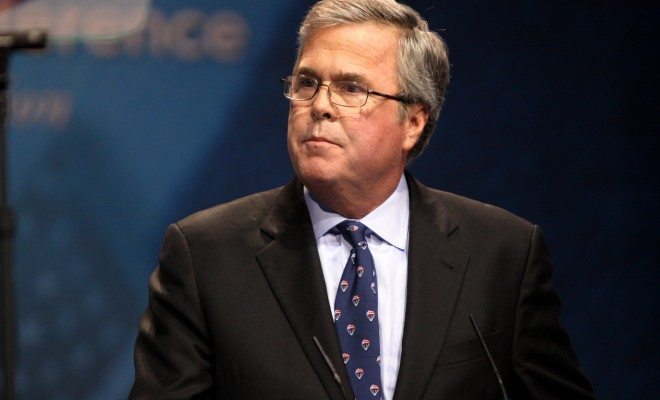 Can Jeb Actually Fix it?: Bush Looks to Revamp His Struggling Campaign

Jeb Bush was once viewed as a serious potential contender for the Republican presidential nomination. But his campaign has languished in recent months, especially after some truly lackluster debate performances. So, today, Bush launched a revamp, with a new slogan “Jeb can fix it.” But will it work, or is Bush’s campaign already as good as dead?

There have been a lot of signs lately that Bush’s campaign isn’t doing well. Polls aren’t looking too good for Bush–a recent NBC poll last week had him at 5 percent nationally, behind Donald Trump, Ben Carson, Ted Cruz, and Marco Rubio. In Florida, his home state, he comes in at 4th, according to a ViewPoint Florida poll.

On the organizational front, Bush also isn’t doing so hot. Last week, the news broke that Bush’s campaign was slashing its budget across the board due to money struggles. The campaign is removing senior staff from the payroll and downsizing office space. Overall, the campaign is attempting to cut payroll by 40 percent and the overall budget (with some exceptions) by 45 percent. Combine these polling and payroll issues with the fact that Bush had yet another less-than-stellar performance at the most recent debate, and he’s not looking so good.

It’s in this context that Bush’s team is attempting to revamp his campaign strategy. In a press conference today he spoke about his new vision. Bush explained that the advice he’s gotten from critics ranges from the aesthetic, such ditching his glasses, to the strategic, such as being more passionate. But, as Bush stated:

But I have learned two important things from my time serving the people of Florida: One, I can’t be someone I’m not. And, two, getting things done isn’t about yelling into a camera, or regurgitating sound bites free of substance.

His speech also included some pretty unsubtle references to two of the candidates polling ahead of him–Donald Trump and fellow Floridian Marco Rubio. Clearly talking about Trump, he stated that you can’t just tell Congress they’re fired and then go to commercial break. In a more veiled reference seemingly to the language Rubio has been using in his campaign,  Bush stated:

The challenges we face as a nation are too great to roll the dice on another presidential experiment. To trust the rhetoric of reform over a record of reform.

Bush also unveiled the new theme of his campaign: “Jeb can fix it.” However, as often happens on the internet, there have already been plenty of riffs about the new slogan.

The “it” in “Jeb can fix it” apparently does not refer to campaign slogans. — Ronan Farrow (@RonanFarrow) November 2, 2015

Oh Lord. This is just pathetic & sad now. ‘Jeb Can Fix It’ sounds like a book for preschoolers. Feeling second hand embarrassment #facepalm

So with this revamp, Bush has gotten a little bit of extra attention–although not necessarily the kind of attention he wants. We’ll have to see if Bush can “fix” his campaign, but if things keep heading the same direction for him poll-wise, and cash-wise, it’s looking unlikely.

Anneliese Mahoney
Anneliese Mahoney is Managing Editor at Law Street and a Connecticut transplant to Washington D.C. She has a Bachelor’s degree in International Affairs from the George Washington University, and a passion for law, politics, and social issues. Contact Anneliese at amahoney@LawStreetMedia.com.
Share:
Related ItemsBen CarsonBushDonald TrumpFloridaJeb BushJeb Can Fix ItMarco Rubio