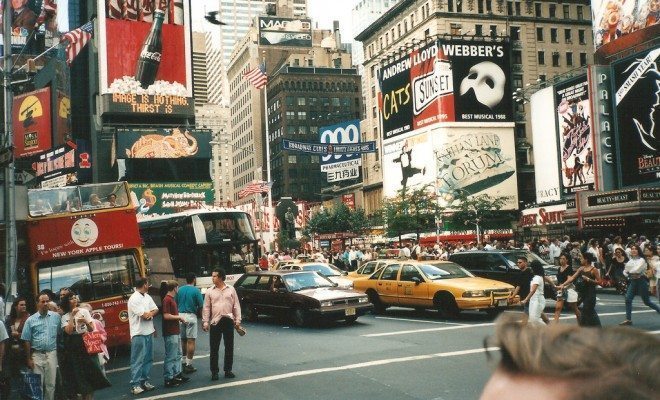 Who Did it Best? The Candidates Take on the Big Apple

There’s been a lot of talk about the qualities the United States needs in its next president. Should he or she be a forceful figure who will lead our country in defeating ISIS? Does it matter if the president is fashionable? A financially savvy leader who can pull us out of debt? How old should the president be? With all these different factors to consider, it’s no wonder Americans are confused about who to vote for.

Have no fear, because one undeniable quality stands alone as the most important: how well does a candidate understand the informal rules and faux pas of New York City? And this week, we found out. In a trip to New York to sway voters before the state’s primary, the candidates were tested on city smarts: whether that be their tunnel talent, as they traveled under the city to get from place to place; their pizza wisdom, as they sat down for a big ol’ slice of pie; or their general understanding of how to be human in a city, in the case of Ted Cruz. Needless to say, some candidates quickly came out on top.

While Kasich may be last in the polls, at least he was first in our hearts when he visited this local deli in the Bronx. With his “can do” attitude–which propelled him to eat two helpings of spaghetti, a personalized sandwich, and more–and a winning smile for the crowd, Kasich was easily the most charming visitor in New York.

A crazy and memorable scene in the Bronx this afternoon as Kasich stopped to chow down on some food at Mike’s Deli pic.twitter.com/FA2F8rQNEB

Unfortunately for Kasich, he doesn’t have a perfect NYC record after a pizza disaster a few weeks ago, in which he was seen eating a slice with a fork and a knife. Come on John, talk about detrimental gaffes!

John Kasich just ate his pizza with a fork and knife pic.twitter.com/KQ0UXCoJjN

Luckily for him, the likable dining-sesh at Mike’s Deli helped New Yorkers forgive and forget when it came to the recent pizz-astrophe, just not quite enough to actually put him ahead of Trump in any of the real polls.

As one of three candidates with actual ties to New York, Trump was a standout this past week. After repeatedly being attacked by Ted Cruz for his “New York values,” Trump took the opportunity to show exactly what he thinks New York values are. He and his wife, Melania Trump, toured the 9/11 Memorial Museum, also dropping a whopping $100,000 donation to the museum. With his name already all over a lot of the city, thanks to the Trump Tower, this donation just helped Trump secure what was already a pretty striking lead in his home state.

Sanders, another New York native, had a bit more of a rough go this week after he failed to answer some questions about the city correctly. When the Senator was asked to comment on the cheapest way to ride the subway, he jokingly cited jumping over the turnstile as the best way to save a quick buck–how cute! Unfortunately, when pressed a little further on the issue, Sanders showed just how lacking in city smarts he has become since moving to Vermont and working in D.C.:

What do you mean, ‘How do you ride the subway these days? You get a token and you get on.

For those of you who, like Sanders, may not have been on the subway in quite a while, the joke here is that subway tokens haven’t been used in New York in over a decade. Oops! Looks like your age is showing just a tad, Bernie. But, all in all, a valiant effort.

Clinton’s trip to New York may have been the most memorable and newsworthy visit, as it spurred tons of articles, parody videos, and internet memes making fun of her clear inability to use public transportation. For that reason alone, Clinton ranks near the very bottom of the list.

So, what actually happened? When entering any form of a subway system, the most annoying thing that can happen is someone holding up the turnstiles. And that’s exactly what Clinton did. It took not one, not two, but five swipes of her MetroCard to get through the turnstile. Talk about a serious city faux pas!

The good news about this gaffe? Her campaign has turned it into a quite hilarious 404 page on her website. Whenever you click a link or page that no longer exists on Clinton’s website, you are redirected to a gif of her swiping her MetroCard with a message that reads, “trying to get where you want to go? This page isn’t it.” While the campaign may be making light of a potentially negative situation, there’s only so much joking around you can do about a candidate’s ability to handle New York.

Clinton clearly wasn’t ready for the underground travel; how can we be sure she can handle the sad D.C. Metro or the country?

Last on the list is Ted Cruz. Not only does this man not know how to act in the city, he straight up insulted NYC in a past debate with Donald Trump. After using “New York values” to insult Trump, Cruz was not welcomed with open arms when he traveled to the Bronx last week. A school in the Bronx canceled a visit from Cruz after the students threatened to stage a walk out because they didn’t agree with his views. Cruz was also heckled out of a restaurant where he was eating by angry protestors who believe that his anti-immigration platform is the opposite of everything people in the Bronx stand for. The Daily News featured nasty slogans, slamming Cruz for his anti-NY sentiment on multiple newspaper covers.

While there are obviously other factors to take into account when voting for president, these New York successes and failures could be pretty influential in swaying voters one way or another. What the candidates have hopefully learned from their New York trips is that it’s important to respect the places they campaign in and appreciate the diverse groups of people they will represent if elected president. After all, city and travel etiquette can say a lot about a person.