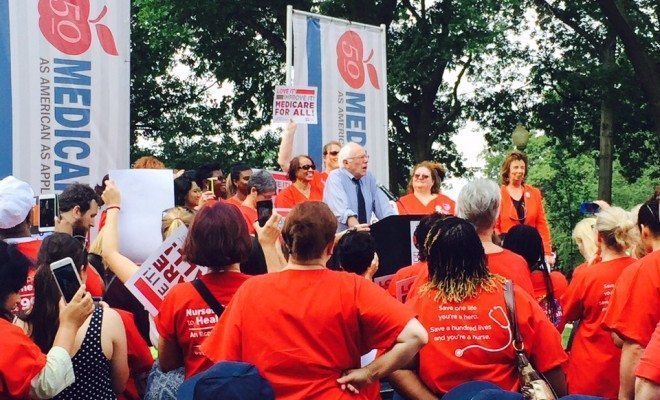 Last Thursday marked the 50th anniversary of Medicare, a program instituted under the Social Security Act in 1965 by President Lyndon B. Johnson. To honor the anniversary of Medicare, the National Nurses United held a rally at which Presidential hopeful Bernie Sanders spoke. His comments shed further light on his positions on Medicare and American healthcare as a whole.

The rally brought together many different groups of people who all supported expanding Medicare. Many speakers from the National Nurses United spoke before Sanders and shared personal stories of why Medicare should be available for everyone.

Sanders, a big advocate of Medicare, stated, “healthcare is a right, not a privilege of all Americans.”

Sanders appears to strongly believe that everyone deserves health care and has worked hard during his time as a senator to make that happen. Sanders strongly supports Medicare for all, by transforming it into a single payer system. Under this system, a single or quasi-public agency would organize health care financing, but the delivery of care would stay privatized. Sanders’ home state of Vermont is one of the states that has moved forward with this arrangement.

For Sanders, Medicare expansion fits into his overall platform of equality for all. He strongly believes that all Americans should have equal rights and equal opportunities, and affordable healthcare for all is a necessary aspect of that equality. He’s attracting supporters with those kinds of goals, given that 48 percent of Americans polled in 2013 said the healthcare system needs fundamental changes, and 27 percent said the healthcare system should be completely rebuilt.

Medicare, and what to do about the current healthcare system in America, will be hot topics in the 2016 election particularly because this issue will continue to affect Millennials in the upcoming years. Most Millennials are children of baby boomers who are now becoming older, and need to have affordable healthcare in some capacity. The way the healthcare system is set up in America, the older generation depends on the younger generation to take care of them because young people are the ones who pay the most into Social Security, Medicare, and Medicaid. However, if Sanders’ plan to create a single-payer system reaches fruition, the younger generation will not be entirely held responsible for taking care of the older generation, as the government would play a larger role in organizing health care financing.

Overall, the rally was successful and discussed why Medicare should be reformed and expanded. It’s essential that the future president realizes the need for affordable healthcare for all Americans, and takes action to make it happen.

Jennie Burger
Jennie Burger is a member of the University of Oklahoma Class of 2016 and a Law Street Media Fellow for the Summer of 2015. Contact Jennie at staff@LawStreetMedia.com.
Share:
Related Items50th Anniversary of MedicareBernie SandersHealthcareMedicareNational Nurses UnitedSingle-Payer System