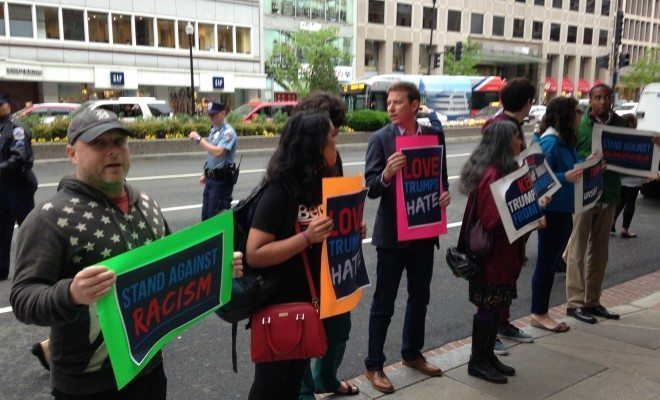 Inside the historic Mayflower Hotel in Washington D.C. this afternoon, the mainstream press junket packed into a cozy conference room, preparing for a long awaited detailed foreign policy speech from Donald Trump.

Outside, a small group of protestors braved the gray early spring chill to chant and jeer the billionaire businessman, as sleepy cameramen waited around hoping to capture Trump after his speech, which had the presidential hopeful reading from a teleprompter for the first time. (Which according to Twitter, didn’t go all that smoothly).

The protestors held colorful makeshift signs with slogans like: “Love trumps hate” and “stand against Islamophobia.”

Protestors face the gilded doors of the Mayflower Hotel as security looks on. [Image Courtesy of Alec Siegel for Law Street Media]

With a backpack slung over his shoulder and his hands cupping his mouth, Justin Scoville led the protestors in a rhythmic chant: “Donald Trump go away, racist, sexist not OK.”

“I don’t really care about his foreign policy,” said Scoville, 26, who was arrested twice last week as a participant of the Democracy Spring protests. “I care about his domestic policy. What he represents domestically I find much more disturbing.” Addressing Trump’s reason for visiting the posh Mayflower–a detailed foreign policy speech–he added: “I think [US foreign policy] will continue no matter who is in office.”

Over wailing sirens and the general cacophony of downtown D.C., the protestors at times banded together shoulder by shoulder in front of the entrance of the hotel, anticipating Trump’s arrival, or bunched up in a tight mass.

Beyond the gray concrete exterior of the Mayflower, in front of a group of reporters and cameramen, Trump dove a bit deeper into his broad foreign policy plan. Press members have reported the following details of the speech on Twitter. Various statements by Trump include:

“I would absolutely bring back interrogation.”

Amid the “Trump=Nazi” signs and young protestors–the Mayflower is blocks away from the George Washington University campus–the number of visible Trump supporters totaled one.

Laurie Saxson did not confront the chilly wind in a sleeveless turquoise dress simply to show support for a more detailed policy vision or a more “presidential” version of Trump.

Laurie Saxson shows her support for Trump, unlike the man in the camouflage jacket behind her. [Image Courtesy of Alec Siegel Via Law Street Media]

“I think he’s great the way he is,” said Saxson, who wore the ubiquitous red “Make America Great Again” hat. Saxson said she felt confident in Trump’s ability to follow through on the promise sewed onto her hat, and reiterated his positions in the same 140-character style of the candidate who hasn’t roused this much excitement in her “since Reagan”: “Strong economy, fight government corruption, and get rid of the illegal alien problem.”

As Saxson stood alone in the chilly air in a silent show of support, the protestors rushed to the curb as the wailing of a motorcade came cruising by, presumably escorting Trump. They stood on their tiptoes and shoved their signs toward the oncoming police cruisers and black SUVs, chanting, “two, four, six, eight, love always trumps hate!”