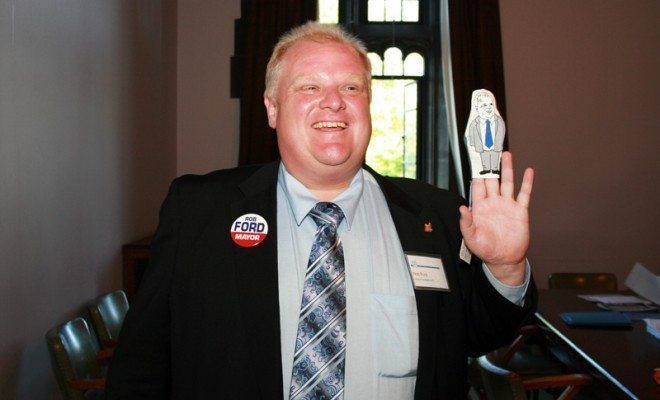 Where in the World is Rob Ford? 15 Minutes of Fame, 15 Dumb-Ass Things

While the city of Toronto collectively wonders where in the world its mayor, Rob Ford, is today — Rehab? The U.S? Eating a sandwich at the corner deli? — we thought it’s the perfect time to take a walk down memory lane. Are Rob Ford’s 15 minutes of fame winding down? Doesn’t seem like it — this most recent sparkling example of stupidity was just released today.

The Toronto Sun released this video showing our favorite beleaguered crack head mayor ranting in a bar. It’s quite spectacular, especially it means that Ford has apparently mastered being in two places at once, given that he’s currently supposed to be in rehab and his family claims that he has not left rehab since being admitted. Rob Ford is saying some pure gold in this video, my favorite being: “I’m nodding here. I’m in f—ing divorce and going to the f—ing doghouse and going in a hotel. (Inaudible) I don’t know what to say.”

Oh yeah, Rob Ford’s doing as well as always. And if you like that video, make sure to check out 15 other ridiculous Rob Ford moments below.

Bumbling Toronto Mayor Rob Ford has made waves in recent weeks for the revelation that he once smoked crack while “in a drunken stupor” this February. I’d love to say that this was the only dumb thing Mayor Ford has ever done, but where would the fun be in that? Let’s look at a countdown of Mayor Ford’s oddest, most embarrassing, and downright idiotic moments.

15. That one time the Toronto City Council tried to strip him of his power after the crack smoking scandal and he compared his side of the story to…The Gulf War.

“This, folks, reminds me of when — and I was watching with my brother — when Saddam attacked Kuwait. And President Bush said, ‘I warn you, I warn you, I warn you, do not.’ Well, folks, if you think American-style politics is nasty, you guys have just attacked Kuwait. Mark my words, friends, this is going to be outright war in the next election, and I’m going to do everything in my power — everything in my power — to beat you guys.”

Why it’s cringeworthy: C’mon, Mayor Ford. The Gulf War, really? I hope we’re not talking about that Gulf War where tens of thousands of people were killed. You’re comparing your reelection campaign to a deadly war? A+ for complete lack of sensitivity.

14. In 2002, when Mayor Ford was a City Councilor, there was a discussion about putting a homeless shelter in his district. Mayor Ford made the always eloquent point that instead of having a “public meeting” about said homeless shelter, maybe a “public lynching” would be more appropriate.

Why it’s cringeworthy: Do I even have to answer this one? This wasn’t Mayor Ford standing up for his constituents like he claimed, it was him being a gigantic jerk about a legitimate proposal. That doesn’t really incite compassion in the hearts of those who should be voting for him.

Why it’s cringeworthy: Why was he screaming at some random Toronto visitors? Did they root for the other team or something? Now, I’m not going to pretend I know that much about Toronto tourism, but it seems to me like that is not a good way to get anyone to visit your city.

12. Number 12 on my list is a nice followup on Number 13. After the news broke that Mayor Ford was kicked out of a hockey game, he had a great excuse: he claimed he was never even at the game. He originally told the Toronto Star: “This is unbelievable. I wasn’t even at the game, so someone’s trying to do a real hatchet job on me, let me tell you.” Eventually he had to admit that he was there, and just said that he had been irresponsible and wasn’t perfect.

Why it’s cringeworthy: Dude, we live in a world where everyone has a camera, or a camera phone, or something. It’s pretty hard to deny that you weren’t at a public event. It’s not even a good try.

11. At that same City Council Meeting where Mayor Ford compared his life to the Gulf War, he absolutely plowed into a woman while trying to walk.

Why it’s cringeworthy: Nothing says “let me keep running this city” and “I’m totally not on drugs” like being really, embarrassingly, uncoordinated.

10. In 2007, Mayor Ford said that if a bicyclist gets hit by a car it’s definitely the bicyclist’s fault. He also compared bike lanes to “swimming with the sharks.” My favorite part of this clip, though? Definitely the last sentence: “My heart bleeds for him when I hear someone gets killed, but it’s their own fault at the end of the day.”

Why it’s cringeworthy: Lack of understanding about the difference between sharks and humans driving cars aside, there is a huge logical fallacy to Mayor Ford’s argument. He says roads are dangerous and people shouldn’t be cycling. Then he goes on to say that therefore, the implementation of bike lanes, which would make this all safer, is a bad idea. Mayor Ford, that is not how logic works, but good try!

9. Mayor Ford’s use of the term “Orientals.” He stated:

Why it’s cringeworthy: Are you kidding me?

8. In 2011, a Canadian comedian showed up at his door pretending to be a journalist and asking him satirical questions. It’s also probably important to note that she was dressed like Xena, Warrior Princess. Weird comedy show aside, a rational response to this is not to call the police, as Mayor Ford did. In an expletive-filled 911 call, he claimed he was “attacked.”

Why it’s cringeworthy: Because it displays he has no sense of humor. Because it also displays a complete overreaction to a comedic stunt. And, because he apparently said to the dispatcher, “”Don’t you f***** know? I’m Rob f****** Ford, the mayor of this city.” Oof.

7. A former mayoral candidate, Sarah Thomson, ran into Mayor Ford at a political function about 9 months ago.  Ms. Thomson is a pretty woman, and no one seems to appreciate that more than Mayor Ford. He reportedly grabbed her butt and then told her she should have joined him in Florida a week earlier, because his wife wasn’t there. She later posted this picture to her Facebook:

Why it’s cringeworthy: At first I thought I was going to make a comment about not grabbing women’s butts in public, but I think Thomson covered it with her Facebook comment. So let’s all take a minute to appreciate the face he’s making in this picture instead.

6. Speaking of Rob Ford and women….he’s had a veritable plethora of problems with his wife and other female members of his family. On Christmas day in 2011, his mother-in-law had to call the cops because he was drunk, threatened to kidnap the couple’s children, and bring them to Florida.

Why it’s cringeworthy: A) Doesn’t he have better things to do? Like, I don’t know, run a city? and B) She made the call sometime between 4 AM and 5 AM. Who in the world is drunk and trying to go to Florida at 4 in the morning?

5. …To continue number 6, there have been multiple calls from Mayor Ford’s house alleging domestic abuse. On at least one occasion, both he and his wife may have been drunk or under the influence of drugs when the police showed up.

Why it’s cringeworthy: I seriously considered not including this one on the list, I really did. It’s about domestic abuse, and domestic abuse is not something that should ever be joked about it. But I did include it, because as funny and snarky as this list is supposed to be, there is a point. Mayor Ford is an idiot. He is unfit for office, and he should be embarrassed by the things he’s done. ALL of the things he’s done. And not shaming this man for his actions against his family and women…well that’s just unacceptable.

4. He used his mayoral letterhead to try to solicit donations for his high school football charity. In my opinion, that’s a little illegal, and a judge agreed.

Why it’s cringeworthy: Mayor Ford’s defense? He didn’t know he wasn’t supposed to use his position to solicit funds from his own charity. In a bizarre move, an appeals judge actually agreed with that argument, and he was ultimately not removed from office.

3. As a Councillor in 2006, Rob Ford rallied against an AIDS prevention program, stating about the disease, “It is very preventable. If you are not doing needles and you are not gay, you will not get AIDS probably, that’s the bottom line. These are the facts.”

Why it’s cringeworthy: When I first started making this list, I was calm and sitting on my couch. I’m still sitting on my couch, but now I’m not calm and I’m working my way through a very large pile of leftover Halloween candy to soothe my soul. It’s not working, because I keep running across statements like this. These are not the facts, Mayor Ford. They are not. And you should stop talking, forever.

2. That time that Mayor Ford tried to find a drug dealer to buy OxyContin on the street for a constituent. In 2010, a phone call happened where a man claimed his doctor would not prescribe him Oxy. Comments like this were made by Mayor Ford:

Why it’s cringeworthy: One hand, decent job trying to help a constituent. On the other, logical, hand, how could saying that ever seem like a good idea?

Anneliese Mahoney
Anneliese Mahoney is Managing Editor at Law Street and a Connecticut transplant to Washington D.C. She has a Bachelor’s degree in International Affairs from the George Washington University, and a passion for law, politics, and social issues. Contact Anneliese at amahoney@LawStreetMedia.com.
Share:
Related ItemsAlcoholAnti-AIDS PreventionCanadaCrackDomestic ViolenceListsMary FordMIAMissingRehabRob FordScandalSexual HarrassmentSnark of the DayToronto