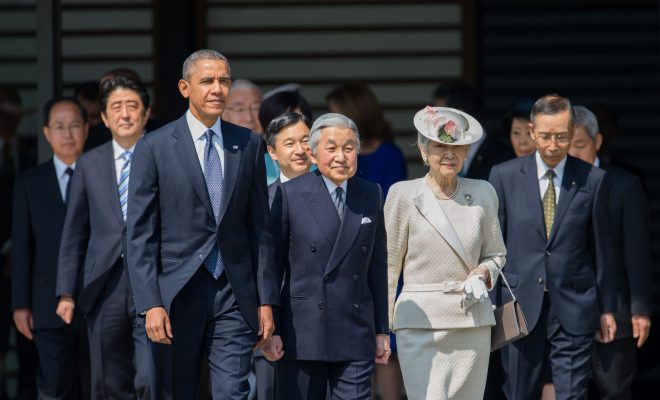 With Trump as President, What’s Next for Japan and the U.S.?

Like most of America’s longstanding allies, Japan is probably concerned, or at least surprised, about what happened here on Tuesday night. Japan, which the U.S. occupied for a time after World War II, now depends on the U.S. for almost all of its security needs–including deterring a nuclear North Korea and an encroaching China. As world leaders seek the ear of Donald Trump to probe whether his campaign rhetoric will hold once he takes office, Japan bursted out of the gate. In a show of good faith, Prime Minister Shinzo Abe held a 20-minute teleconference with Trump on Thursday and arranged to meet with him in New York next Thursday.

According to his deputy chief cabinet secretary, Abe told Trump that “a strong Japan-U.S. alliance is an indispensable presence that supports peace and stability in the Asia-Pacific region.” And though Abe embodies Japan’s version of the “political establishment” Trump railed against during his campaign, the prime minister bit his tongue and chose to pursue the amicable relationship Japan has enjoyed with the U.S. for decades: “America will be made even greater,” Abe told Trump.

President Obama has often signaled a “pivot” to the Asia-Pacific region throughout his presidency–seen with the Trans-Pacific Partnership, a buildup of troops in the region, and engagement with its market, the largest in the world. Based off of Trump’s statements over the past few months, Obama’s Asia-Pacific vision and agenda could be upended by his successor.

“Of course they should pick up all the expense. Why are we paying for this?” Trump said, referring to the nearly 54,000 U.S. troops stationed in Japan. He has blasted the TPP trade deal, which Japan’s lower house of Parliament passed on Thursday. Trump has also toyed with the idea of Japan and South Korea building up their own atomic arsenals, which would scale back the U.S.’s role in defending both countries against China and North Korea.

President Park Geun-hye of South Korea also called Trump on Thursday, and stressed the importance of the U.S.-South Korea alliance in pressuring its erratic northern neighbor. Trump assured her that he “agreed “100 percent,” according to a statement Park released after the phone call. “We are with you all the way, and we will not waver,” Trump said in a statement.

It’s the unknown of Trump, as well as the unprecedented campaign he ran, that spooks Japan and other traditional U.S. allies in the region. Some in Japan worry that even if Trump does not abandon Japan and Asia altogether, he could place the region much lower on his priority list than Obama, creating a void of influence that China could fill. Additionally, building up a nuclear arsenal in Japan might be difficult, if not impossible, because anti-nuclear sentiment runs rampant in pacifist Japan, which technically does not even have a military.

“We should be aware that the U.S. will pay less attention to Asia,” Nikkei Shimbun, a Japanese financial newspaper, wrote in an editorial Thursday. “During the transitional period, China could make a new move in the South or East China Sea. The Japanese government needs to be ready for such a situation.”

Alec Siegel
Alec Siegel is a staff writer at Law Street Media. When he’s not working at Law Street he’s either cooking a mediocre tofu dish or enjoying a run in the woods. His passions include: gooey chocolate chips, black coffee, mountains, the Animal Kingdom in general, and John Lennon. Baklava is his achilles heel. Contact Alec at ASiegel@LawStreetMedia.com.
Share:
Related ItemsAsiaChinaDonald TrumpJapanNorth KoreaNuclear DeterrenceSouth KoreaTPP