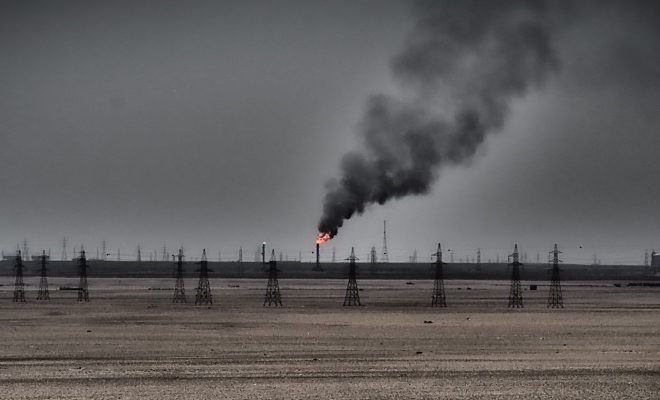 The military tactic of “scorched earth”–destroying land and resources while entering or retreating from a territory so that enemies cannot benefit from occupying the land–dates back to ancient history. But most of us associate it either with the Napoleonic wars or the World Wars, when both Russia and Germany destroyed infrastructure and land to slow the advance of their enemy.  And in Iraq, as ISIS fights to control Mosul, the scorched earth tactic is alive and well–during its retreat, ISIS has been regularly lighting oil wells on fire, hoping to slow the government forces advancing on it.

The town of Qayyarah, south of Mosul, has been burning for months, the peril escalated by ISIS igniting the Mishraq sulfur plant outside of the town in October. A sulfur cloud stretches out over the town and crude oil runs through the streets, forcing the evacuation of local families.

It can take weeks to put out just a single fire, as the firefighters have to check the land around the well for booby traps and landmines before beginning their work. The toxic smoke that the firefighters inhale makes the work almost unbearable and despite their best efforts, there are still over a dozen wells burning night and day. Even after the fire has been extinguished, the damage is not yet done. Entire villages are stained with soot and smoke inhalation is already damaging the lungs of the populace, as hundreds are being rushed to hospitals. The sky is dark for most of the day and livestock are dying at an escalated rate under the pressure of constant exposure to smoke and soot.

The burning of the oil wells will have a lasting, devastating impact on the landscape–not just in terms of environmental damage but regarding human security–an entire generation of children growing up with lung damage. NASA satellite images provide a grim portrait of how quickly the smoke and sulfur-dioxide released by the fires has spread and raise questions about when the land will be inhabitable again.

It is fitting that ISIS, with its medieval vision of law and order, would revive a violent tactic that should have died out before the turn of the century. ISIS’ burning of the oil wells is not the only way that ISIS is manipulating natural resources. ISIS has also cut electricity to water stations in neighborhoods where Iraqi troops are arriving, leaving approximately half a million people without access to running water or clean drinking water. The lack of drinking water would have been a critical problem even without the fires, but with citizens choking on the smoke, the need for drinkable water is greater than ever before. ISIS is leaving nothing but husks of infrastructure in its wake, forcing civilians to cooperate with it in order to survive–following the terrorists to cities with clean air and water rather than staying put and waiting for Iraqi troops to arrive under the clouds of sulfur.

Jillian Sequeira
Jillian Sequeira was a member of the College of William and Mary Class of 2016, with a double major in Government and Italian. When she’s not blogging, she’s photographing graffiti around the world and worshiping at the altar of Elon Musk and all things Tesla. Contact Jillian at Staff@LawStreetMedia.com
Share:
Related ItemsEnvironmentEnvironmental DamageFirefirefightersIraqISISMosulOilPollutionSmokeSmoke inhalation