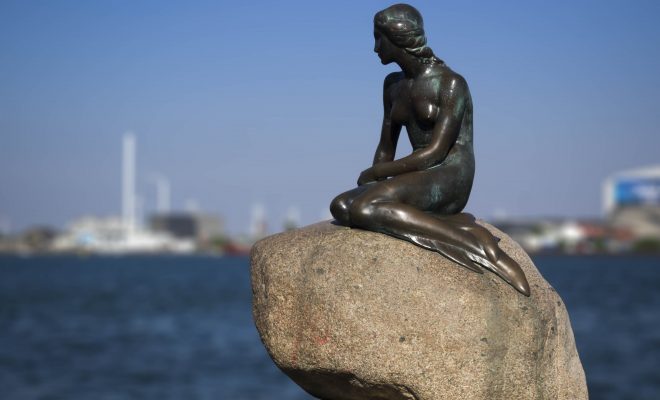 Vandalism as Activism: Protesting Whaling on the Faroe Islands

The iconic Little Mermaid statue in Copenhagen has taken on a new look this month: anti-whaling advocates vandalized the statue, coating it in red paint in an effort to draw attention to the endangered whales of the Faroe Islands.

For a thousand years, the people of the Faroe Islands have conducted an annual grindadráp, a drive hunt where a flotilla of small boats drive whales and dolphins into a small bay where they are killed by hand with knives. The organization Sea Shepherd has worked to end these hunts since the 1980s, but the inhabitants of the islands have pushed back, arguing that the “grind” is critical for both food and preserving the islanders’ sense of community. The enmity between environmental advocates and the Danish authorities has grown exponentially since crews of Sea Shepherd boats were detained by the Danish navy when they tried to block the 2014 grind. Whaling is illegal within the EU and Sea Shepherd has declared that Brussels must launch “infringement proceedings” against Denmark for allowing the grind. However, the Faroe Islands have a unique status–as an autonomous country within the Kingdom of Denmark, they rely on Denmark for military, judicial, and foreign affairs but have control over their own domestic issues.

Carl Christian Ebbesen, head of Copenhagen’s culture and leisure committee, was outraged by the vandalism, calling it “well out of line” and “as stupid as you can possibly get.” Despite Ebbesen’s dismissal of the red paint, this is not the first time the Little Mermaid statue has been used for political purposes. In 1964, the Situationist avant-garde group sawed off the head of the statue. She has also lost limbs and been painted numerous times by various groups. In 2004, a burqa was draped over the head of the statue as part of protest against Turkey joining the EU and the statue was clothed in a headscarf in 2007 for reasons that are unclear.

Vandalizing the statue may seem like a petty or juvenile act, but it has served its purpose–getting the grinds of the Faroe Island back in the headlines in the wake of Sea Shepherd officially requesting the European Commission punish Denmark for the grinds (Sea Shepherd has claimed no responsibility for the vandalism). Tourists visiting Copenhagen and dozens of media outlets picking up images of the statue have made the red paint stunt go viral, bringing attention to a debate that relatively few outside of Denmark have been following. By next week, the red paint will have been removed from the statue and it will return to its role as a charming backdrop in Instagram snaps for visitors from around the globe–but for the moment, it is a powerful political statement.

In the past, we’ve discussed Greenpeace’s symbolic activism as effective at drumming up sympathy and finding new allies but activism does not always have to take place on such a grandiose scale. The painting of the statue is an effective, albeit temporary, protest–the anonymous painters should consider it a job well done.

Jillian Sequeira
Jillian Sequeira was a member of the College of William and Mary Class of 2016, with a double major in Government and Italian. When she’s not blogging, she’s photographing graffiti around the world and worshiping at the altar of Elon Musk and all things Tesla. Contact Jillian at Staff@LawStreetMedia.com
Share:
Related ItemsdenmarkDolphinsEnvironmentFaroe IslandsFishingGraffitiHuntingOceansProtestSea ShepherdVandalismWhalesWhaling