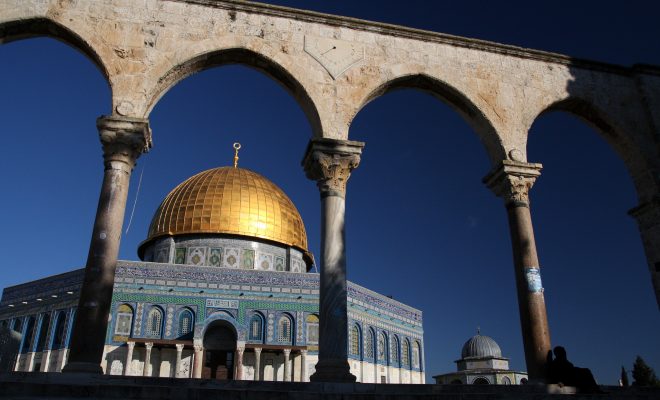 "Dome of the Rock, Jerusalem, Israel" courtesy of yeowatzup; License: (CC BY 2.0)

To Jews, the Temple Mount is home to the remains of two temples, both destroyed by occupying powers millennia ago. To Muslims, the Dome of the Rock is where Muhammad ascended to heaven. And to Christians, the Church of the Holy Sepulchre is where Jesus was crucified and later resurrected.

On Wednesday, UNESCO’s World Heritage Committee passed a resolution to designate the area, walled off atop a hill in the Old City in east Jerusalem, as a world heritage site. But the language used–and omitted–in the resolution enraged Israel, the United States, and others in the international community who view the resolution’s mention of the site only by its Arabic name, al-Haram al-Sharif as offensive. The document also strongly condemns Israel’s role in the Israel-Palestine conflict.

The historical and cultural treasure chest is among the holiest sites in all three Abrahamic faiths: the holiest for Jews and Christians, and trailing just Mecca and Medina in Saudi Arabia, the third holiest for Muslims.

“What needs to be understood, and it will take time, is that this absurdity, which harms not only the historical truth and the truth of the present, but also harms in my opinion the U.N. itself,” said Israeli Prime Minister Benjamin Netanyahu.

Following the submission of the resolution a few weeks go, Israel severed its ties to UNESCO, and on Wednesday, Netanyahu declared he will recall Israel’s ambassador to UNESCO. Though 58 countries are members of the cultural body’s executive board, only 21 are part of its World Heritage Committee. Neither Israel, the United States, nor Palestine is a member of that committee. Ten members voted for the resolution, two voted against it, eight abstained, and one was absent.

Crystal Nix Hines, the U.S. representative of UNESCO, called the resolution “continuously one-sided and inflammatory,” with the potential of “damaging the credibility of UNESCO.”

The document is one-sided in more ways than simple semantics. For one, the resolution is titled “Occupied Palestine,” and was submitted by Algeria, Egypt, Lebanon, Morocco, Oman, Qatar, and Sudan. The language throughout the document refers to Israel as the “occupying Power,” consistently highlighting the “deplorable” behavior of Israel in its conflict with Palestine, while ignoring any of Israel’s concerns.

The site sits in the contentious Old City of east Jerusalem, which Israel annexed in the 1967 Mideast War, although the international community does not recognize that move. Sitting on the hinge of the West Bank and Israel, both Palestine and Israel consider east Jerusalem their capital.

Irina Bokova, UNESCO’s director-general who was not directly involved in the drafting or passing of the contentious resolution, offered an all-inclusive statement on Wednesday. “Nowhere more than in Jerusalem do Jewish, Christian, and Muslim heritage and traditions share space and interweave to the point that they support each other,” she said, expressing hope that the world heritage designation could “bridge the divisions that harm the multi-faith character of the Old City.”

Alec Siegel
Alec Siegel is a staff writer at Law Street Media. When he’s not working at Law Street he’s either cooking a mediocre tofu dish or enjoying a run in the woods. His passions include: gooey chocolate chips, black coffee, mountains, the Animal Kingdom in general, and John Lennon. Baklava is his achilles heel. Contact Alec at ASiegel@LawStreetMedia.com.
Share:
Related Itemsal Haram al-SharifIsraelJerusalemNetanyahuTemple MountUNESCOUnited Nations