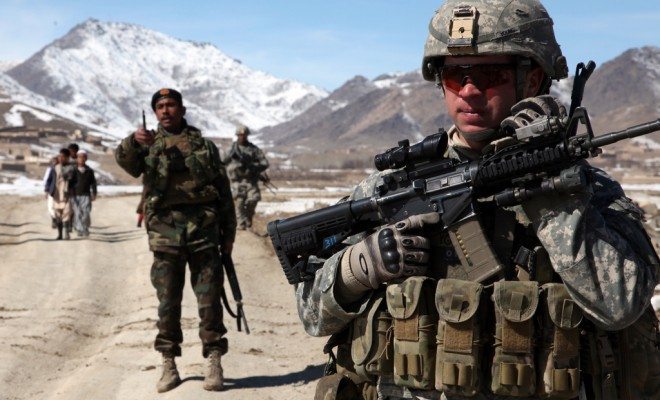 Can Afghanistan stabilize as U.S. forces plan their exit? This was the question posed to five foreign policy experts at a United States Institute of Peace (USIP) panel I attended on Tuesday morning. The panelists examined ongoing crises in Afghanistan and addressed the next steps that they believe are essential to protect the future of the state. My major takeaway from the panel is that serious reconsideration should be given to whether or not leaving Afghanistan is the best policy at the present time. As a student studying international relations, I’ll admit that I am biased in my interest in this topic. But this decision affects us all and given the current status of Afghanistan, should be debated throughly among the 2016 presidential contenders. My vote will not be for a candidate who does not have a polished foreign policy strategy designed to work with the needs of Afghan leaders and communities.

There are certainly many very prevalent concerns about the state of Afghanistan. USIP’s Dr. Andrew Wilder opened the discussion by saying, “We’re going to struggle to find a few positive things to say during our panel.” Wilder, Vice President of South and Central Asia programs, just returned from Afghanistan on a USIP assignment and said the current situation in the country is bleak. Political paralysis, a sense of economic collapse, a deteriorating security situation, and rapidly fading international attention have caused turmoil in Afghanistan. There are international fears that the national unity government (NUG)–which was just formed in September 2014–may not be able to withstand the external violence and the internal political fragmentation and ethnic divisions within Afghanistan. Wilder said that we have arrived at a critical juncture in Afghanistan and the next several months will tell whether or not the country will be considered a “success story for U.S. foreign policy.”

These revelations coincide with the U.S. presidential candidacy announcements and I am skeptical of the fact that these pressing issues are not in the forefront of any campaign. The United States’ plan to withdraw troops by the end of 2016 and the international community’s decision to significantly cut foreign aid to the country are untimely, given the many factors contributing to the turmoil occurring there.

For example, security concerns in the state are still paramount. Ali Jalali, USIP Senior Expert in Residence on Afghanistan, discussed these issues, saying that there is tension within the government of Afghanistan to maintain unity and to govern effectively, and “sometimes effectiveness has been disregarded to maintain unity.” According to Jalali, in 2015 Afghan security forces, including local police, have suffered a 70 percent increase in casualties from this time last year. The average count of casualties per week currently stands at around 330. This increase in violence is directly related to the decrease of foreign aid and military services. The toxic combination of a new unstable government with leaders who have not yet been proven trustworthy, and the simultaneous withdrawal of U.S. troops is increasing the likelihood of a resurgent Taliban and potentially wasting years of war and the American lives lost during the conflict. The withdrawal at this critical yet sensitive time in Afghanistan’s move toward stabilization also provides the perfect breeding ground for ISIL to gain power and control. How to deal with those concerns will be a major hurdle for our next leader–the hands-off strategies we have mapped out will almost certainly need to be rethought.

Another consideration is the precipitous decline in economic growth sparked by the international drawdown of troops and aid–expanded upon at the event by Dr. William Byrd, USIP Senior Expert on Afghanistan. Byrd stated, “The fiscal crisis is quite dire with no end in sight.” He offered his opinions on how to make economic improvements in the country, but all of the strategies are so fundamentally intertwined with security and political implications that it is difficult to offer many viable solutions. For example, Byrd said that the best way to make improvements in the short run is by increasing the number of businesses in the country; however acknowledged that, “businessmen will look at the political and security situation and will not want to invest in Afghanistan due to the instability.”

To improve the chances of the Afghan government’s survival, the U.S. needs to support the NUG militarily, politically, and financially. Scott Smith, Director of USIP’s Afghanistan and Central Asia program, stated, “Two years is far too short a period to have all of this take place.” In other words, the level of support necessary to prevent collapse in Afghanistan cannot be achieved with a 2016 U.S. withdrawal. The United States and the United Nations should adopt a situational withdrawal policy rather than a time-oriented plan. We need to stay until the situation is stabilized and finish what we started. Yes, we should push for eventual Afghan independence, but we should not expect that so soon; to do so is detrimental to a potentially stable future. Politicians and voters should be rethinking these decisions and questioning whether they value idealistic or pragmatic plans more. Dr. Wilder ended the discussion by stating, “We should try to remain engaged, certainly not at the levels of the past, but enough to increase the prospects of peace, stability and independence in Afghanistan.” This advice should act as a guide for our presidential contenders and is something all Americans should keep in mind as we move toward 2016.