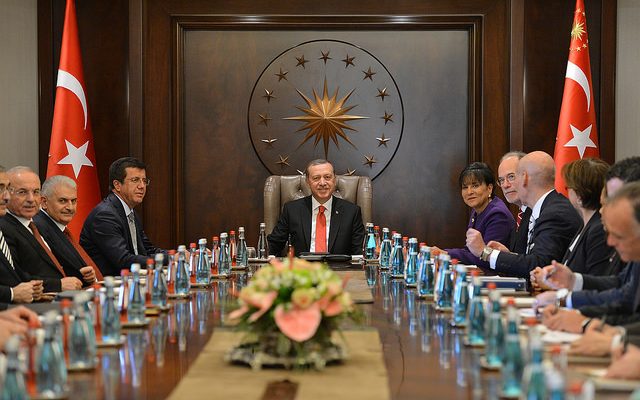 Capping off a years-long pursuit of power, Turkey’s President Recep Tayyip Erdogan strengthened his rule on Sunday, as a referendum passed that changes the constitution from a parliamentary system to a presidential system. While supporters claim the new system will stabilize a government that faces growing internal and external threats, detractors say it will effectively give the Middle East yet another authoritarian leader. With the constitutional change, Erdogan could lead the country until 2029.

The referendum passed by a much narrower margin than many observers–including Erdogan–expected: 51.4 percent of the country supported the system change, while 48.6 percent opposed it. The narrow result shows just how divided Turkey is at a time of growing tensions both at home and abroad.

Domestically, the country is coping with the fall-out from last July’s coup attempt. Erdogan’s government has purged at least 100,000 workers from their jobs, and has jailed thousands of others, all accused of being followers of the exiled cleric Fethullah Gulen. Erdogan accuses Gulen, a onetime political ally, of fomenting the coup. Gulen lives in Pennsylvania.

Turkey has also gone from being a potential member of the European Union to being a thorn in its side. As the campaign for the referendum heated up in recent months, Erdogan sent over his ministers to Europe to drum up support among its millions of Turkish citizens who were eligible to vote–Germany alone has about three million Turkish citizens. The Netherlands, Germany, and others barred Turkish officials from campaigning; Erdogan likened their governments to Nazis. The relationship has soured ever since.

In addition to its domestic concerns, Turkey is a key player in the Syrian conflict. It holds small slices of territory in Syria’s northern border with Turkey, and cooperates with the U.S.-led coalition in airstrikes against Islamic State militants. Though differences remain between the U.S. and Turkey’s goals in the region–Turkey considers the Kurdish fighters, a U.S. ally, terrorists–the two remain vital partners in the fight against ISIS.

Sunday’s referendum result concerns those that see Erdogan as being on a mission to tighten his grip on the country’s politics. Since taking the presidential post in 2014, Erdogan has effectively swapped the job titles of prime minister and president. The presidential perch was designed to be ceremonial, and the prime minister–a position he held for ten years following his switch to president–was the position meant to wield power.

Among other sweeping changes, the new presidential system scraps the prime minister position altogether. It also allows a president to serve for up to two terms of five years each, with a possible extension to three terms. The president can directly appoint top public officials, including judges, and also has the authority to intervene in judicial decisions. New presidential and parliamentary elections are scheduled for November 3 2019.

Some observers saw Erdogan’s campaign as unfair–the main opposition party is calling for a recount. The Organization for Security and Cooperation in Europe (OSCE) derided the tactics of the government.

“The campaign rhetoric was tarnished by some senior officials equating ‘No’ supporters with terrorist sympathizers, and in numerous cases ‘No’ supporters faced police interventions and violent scuffles at their events,” said OSEC in a  statement.

Immediately after the results came in, Erdogan gave a speech to his supporters in Istanbul. “We are enacting the most important governmental reform of our history,” he said. Erdogan also suggested that he would hold a referendum on bringing back the death penalty to Turkey, which would effectively end its bid to become an EU member-state.

Alec Siegel
Alec Siegel is a staff writer at Law Street Media. When he’s not working at Law Street he’s either cooking a mediocre tofu dish or enjoying a run in the woods. His passions include: gooey chocolate chips, black coffee, mountains, the Animal Kingdom in general, and John Lennon. Baklava is his achilles heel. Contact Alec at ASiegel@LawStreetMedia.com.
Share:
Related ItemsEUISISParliamentRecep Tayyip ErdoganReferendumSyriaTurkey