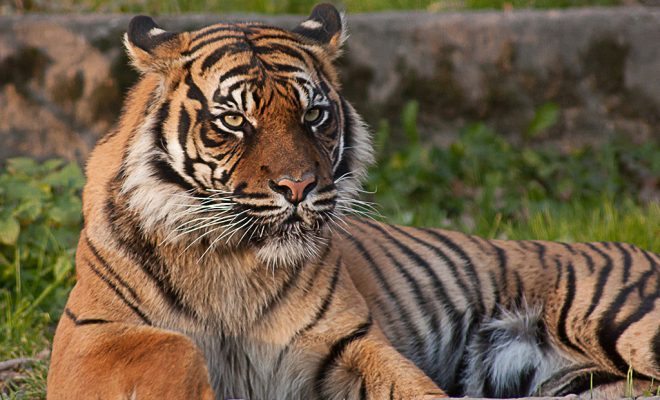 At the Wat Pha Luang Ta Bua temple near Thailand’s western border with Myanmar, Theravada Buddhist monks live with and take care of full grown tigers. They cuddle. They smooch. And for $140, tourists can buy a day of playing with the cats as well, hand feeding and bathing them. But on Wednesday, as a government-led campaign to end the temple’s tiger tourism was underway, a large freezer was found. Inside: 40 tiger cub carcasses, some preserved in jars, others frozen, many dead for years.

The Tiger Temple–as it’s commonly called–was buzzing with Thai officials and police officers, as 64 live adult tigers were hauled away, and the grisly freezer uncovered and unpacked. The seizure was the beginning of Thailand’s Wildlife Conservation Office’s efforts to put an end to the temple’s tiger tourism activities, which have come under increased scrutiny from animal rights groups over the years for mistreating the animals and engaging in black market trafficking.

“The monks have the attitude, ‘I am over the law,'” Teunchai Noochdumrong, the director of the Wildlife Conservation Office told The New York Times a few weeks ago. “They say because they are monks, they have the right to take care of all the animals in that area.”

For years, the temple has faced allegations of trafficking in tiger parts–an illegal offense–and breeding the beasts to sell throughout Asia and especially China, where tiger bone liquor is a highly prized tonic. Trafficking accusations began when a former veterinarian discovered that three adult tigers had gone missing.

Animal rights groups have pressured Thai authorities to end what they saw as the temple’s rough treatment of the tigers. After months of legal battles between the temple and the Wildlife Conservation Office, the campaign to remove the estimated 137 tigers at the temple kicked into high gear this week. Officials say Tiger Temple will be emptied of its tigers by Saturday.

For its part, the temple claims to be a bastion of harmony between humans and tigers, an endangered species with an estimated 3,000 to 3,600 animals left on the planet. The temple earns $6 million a year from tourism. Tiger Temple addressed the allegations in a Facebook post in March, when trafficking suspicions first arose:

We can only surmise why the rumours of selling tiger cubs started, and it could be that some volunteers have jumped to conclusions after seeing cubs carried out of the general area where our tigers are kept,” the post said, adding they put off responding to the trafficking rumors because “the Buddhist way is to keep silent.”

Journalists from London and Thailand commented on the post, asking why the cub carcasses were kept frozen instead of cremated, “as per Buddhist customs.” The temple responded: “The previous vet Dr. Somchai started this policy. Probably in order to combat the allegations of the temple selling the cubs.” Essentially, the Temple is claiming that it kept the cubs to prove that they weren’t sold, but rather died of natural causes.

The tigers will be moved to government facilities around the country. But on its Facebook page over the weekend, Tiger Temple posted a video of one of its former tigers, Dawie, in a cage at its new home at the Khao Pratap Chang Research Facility; the cat’s face was bloodied and cut.

“Our tigers are used to huge open spaces and freedom, not used to being confined in small bare cages,” the post said.

Alec Siegel
Alec Siegel is a staff writer at Law Street Media. When he’s not working at Law Street he’s either cooking a mediocre tofu dish or enjoying a run in the woods. His passions include: gooey chocolate chips, black coffee, mountains, the Animal Kingdom in general, and John Lennon. Baklava is his achilles heel. Contact Alec at ASiegel@LawStreetMedia.com.
Share:
Related ItemsAbuseAnimal RightsCubsThailandTiger TempleTigersWildlife