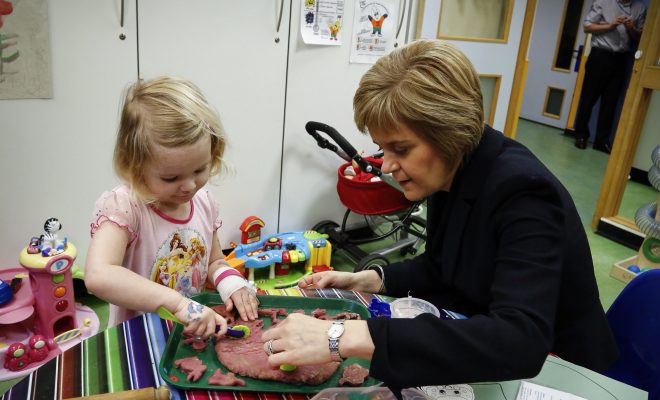 Protesters took to the streets of Glasgow last week to push back against the “rape clause” in the UK welfare system. After reforms of the welfare system took effect in April, the tax credits a family can receive for having children are now capped at two children–except in the case of mothers who have a third child as a result of rape. However, those mothers have to provide evidence that the child was in fact conceived from rape–a provision decried as inhumane.

Rape survivors have to fill out an eight-page form detailing the attack and a third party (such as a healthcare provider or a social worker) must provide additional testimony. The woman can only receive tax benefits if she is not living with the perpetrator and if she has not received financial compensation following a conviction of the perpetrator. But psychologists across the UK have expressed concern that this rape clause will harm survivors. In a letter to The Guardian, a set of psychologists write that forced reliving of the attack may cause “flashbacks, renewed shame and emotional turmoil, and consequently affect how mothers bond with their children.”

The clause was an amendment to an existing law, so it was not debated or voted on in parliament. First Minister of Scotland Nicola Sturgeon’s SNP has decried the clause and has fought against it. SNP MP Alison Thewliss led the Scrap the Rape Clause campaign, presenting a petition with 10,000 signatures asking for the clause to be struck from the tax reforms. Members of the Scottish Parliament have filed a motion to debate the clause, which could push the UK Parliament to also debate it. The SNP is not alone in its discontent: the rape clause may particularly harm women in Northern Ireland, where reporting serious crimes, including rape, is mandatory. If women apply for a tax credit for a third child conceived through rape, they may be drawn into a criminal investigation against their will.

Scottish Conservative leader Ruth Davidson has argued that the Scottish government could set up new benefits to aid families with more than two children, outside of the UK government’s reforms. Davidson accused Sturgeon of simply writing the rape clause off as part of her list of complaints against the UK government instead of actively considering how Scotland could adapt the tax credit system.

Whether or not the rape clause is upheld, families across the UK will find themselves in a new financial bracket thanks to the tax reforms. Historically there has not been a limit to how many children a parent can claim–so large families that have previously benefited from tax credits may now find themselves slipping out of financial stability. The tax reforms disproportionately affect low-income families and will push them deeper into poverty. The rape clause was established in an odd effort to be “compassionate” but the misguided attempt to soften the blow of the tax reforms has only exacerbated ideological divides both within Scotland and the UK as a whole.

Jillian Sequeira
Jillian Sequeira was a member of the College of William and Mary Class of 2016, with a double major in Government and Italian. When she’s not blogging, she’s photographing graffiti around the world and worshiping at the altar of Elon Musk and all things Tesla. Contact Jillian at Staff@LawStreetMedia.com
Share:
Related ItemsChildrenNicola SturgeonRaperape clauseScotlandSexual AssaultSNPTax Creditstax reform