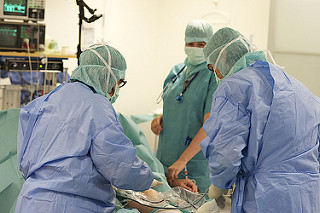 Scottish lawmakers announced last week that the government will introduce a “soft opt-out” system for organ donation. The system, which has raised medical ethics questions in other countries, presumes consent unless an individual has opted-out of donations before their death.

“We have made a transforming decision in Scottish politics,” said Anne McTaggart, a lawmaker in the previous Parliament who initially presented the “opt-out” bill.

This system is an attempt to increase the number of life-saving organ donations. The nation has recently invested heavily in donation campaigns, consultations, and petitions. Last year alone, a record-breaking number of people who were waiting for a transplant received an organ they needed, according to NHS Blood and Transplant.

The new law is trying to build on this growth. Previously, adults willing to donate had to “opt-in” and then hold on to a donor card. Now, all adults will be placed on the donor list unless they have officially stated their wish to not donate. However, family members will get the last say. If they don’t want to go ahead with their loved one’s donation, their wishes will be respected.

Public Health Minister Aileen Campbell said “we should not forget that organ donation is a gift, which can only occur as a result of tragic circumstances.”

“We need to continue doing what we can in order to help reduce the numbers of people in Scotland waiting for transplants,” Campbell continued. “Moving to an opt-out system of organ and tissue donation will be part of the long-term culture change in attitudes to encourage people to support donation.”

Opting into a growing trend

Though many countries, such as Germany or the United States, still prefer an explicit consent system, Scotland isn’t alone in passing a presumed consent law. In fact, “opt-out” policies are gaining ground in Europe and South America as the need for transplants increases.

In the United Kingdom, Wales also debuted a soft “opt-out” policy in 2013, which inspired Ireland and some U.S. states to consider making the jump.

Last Friday, Theresa May announced that the government will also closely monitor how transplant numbers evolve in Wales and Scotland to assess whether the rest of the Kingdom should adopt this law.

“Organ donation hit a record high last year here and we obviously want that to continue and continue to rise,” a Downing Street spokesperson said.

Mixed reactions to the law

Although the bill was passed after 82 percent of a public consultation agreed to the “opt-out” system, some are resistant or see flaws in the policy.

“The State does not have a right to anyone’s organs. Even a so called soft opt-out system ruins the nature of organ donation as an altruistic gift,” said Dr Gordon Macdonald from CARE Scotland, a Christian action group.

Dr Calum MacKellar, of the Scottish Council on Human Bioethics (SCHB) believes the system creates a “very significant risk for serious mistakes,” with no guarantee that a deceased’s wishes are followed and a risk for public confidence to be undermined, thereby impacting overall donation levels.

Yet, many Scots are optimistic that this system will bring about much needed help to some of the roughly 500 people waiting for an organ.

“We believe that genuine choice over organ donation can be facilitated through a soft opt-out system,” said Peter Bennie, chair of British Medical Association for Scotland. “If properly implemented, with adequate resources and staff, and backed up by a high-profile campaign, an opt-out system could save or transform people’s lives.”

Celia Heudebourg
Celia Heudebourg is an editorial intern for Law Street Media. She is from Paris, France and is entering her senior year at Macalester College in Minnesota where she studies international relations and political science. When she’s not reading or watching the news, she can be found planning a trip abroad or binge-watching a good Netflix show. Contact Celia at Staff@LawStreetMedia.com.
Share:
Related ItemsBodyDonationEuropeHealthOrganOrgan donorPresumed consentScotlandWaiver