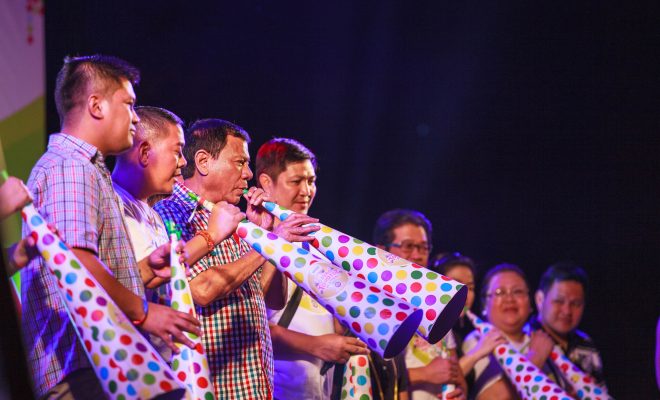 Philippine President Likens Pursuit of Drug Addicts to the Holocaust

He called the most powerful leader in the world, Barack Obama, a “son of a bitch.” He is accused of running death squads that targeted drug addicts when he was mayor. And on Friday, President Rodrigo Duterte of the Philippines compared himself to Adolf Hitler: “Hitler massacred 3 million Jews … there’s 3 million drug addicts. There are. I’d be happy to slaughter them,” he said in his hometown of Davao, where he also served as mayor for two decades.

Running on the promise of being tough on crime, Duterte won the presidency in June. His crusade against drug users and criminals has resulted in scores of extrajudicial killings: hundreds of people have been murdered, either by the police force or vigilante groups, since Duterte took power. Thousands have been arrested.

“At least if Germany had Hitler, the Philippines would have (me). You know my victims, I would like (them) to be all criminals, to finish the problem of my country and save the next generation from perdition,” Duterte said.

His personal barbs and harsh governing style have landed him in hot water, both domestically and abroad. The Philippine Senate’s human rights committee is currently investigating Duterte’s role in the Davao death squad, as well as his culpability in the hundreds of drug-related killings that have occurred since he took office in June.

Unpredictable and prone to attention-grabbing rhetoric, Duterte is worrying a historical ally of the Philippines: the U.S. While delivering a speech to the Filipino community in Hanoi, Vietnam, Duterte signaled a potential alliance shift.

“I will visit China. I will open the door for everyone. I will go to Russia,” he said. “I’m serving notice now to the U.S.: I will maintain the alliance, but I will establish new alliances.” He promised that the joint military exercises between the U.S. and the Philippines in October will be the last while he is president.

Duterte’s comments came as U.S. Defense Secretary Ash Carter announced a renewed U.S. military commitment in Asia, as China continues to build up its presence in the region, and North Korea tests ballistic missiles and, most recently, a nuclear weapon.

But given the Mutual Defense Treaty, signed in 1951, and decades-long partnership with the Southeast Asian island-nation, Carter is undeterred by Duterte’s comments. The U.S.-Philippines alliance is “ironclad,” he said.

Alec Siegel
Alec Siegel is a staff writer at Law Street Media. When he’s not working at Law Street he’s either cooking a mediocre tofu dish or enjoying a run in the woods. His passions include: gooey chocolate chips, black coffee, mountains, the Animal Kingdom in general, and John Lennon. Baklava is his achilles heel. Contact Alec at ASiegel@LawStreetMedia.com.
Share:
Related ItemsDrug AddictsDuterteHitlerObamaPhillippines