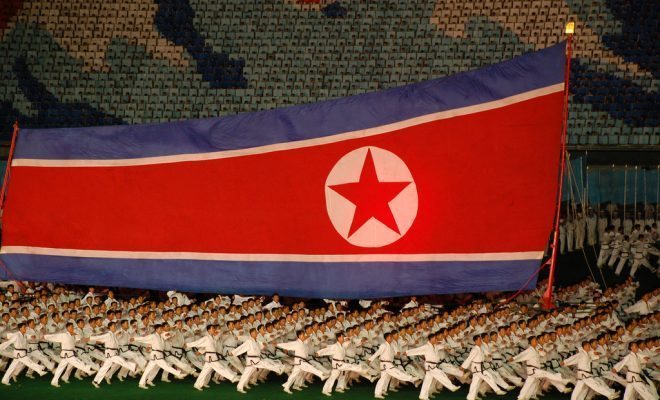 On Wednesday the U.S. sanctioned North Korea’s leader Kim Jong-un for human rights abuses for the first time. There are already sanctions on the country for its nuclear activities, but this is a unique step since it names the dictator himself, as well as 10 other prominent figures, by name. These sanctions are seen as a stepping up of the United States’ efforts to control and isolate the Asian nation. Now North Korea has offered a denuclearization plan–if the U.S. agrees to its demands.

Only one day after the news about sanctions on Kim Jong-un, Pyongyang released terms for a deal. North Korean leaders want the U.S. and South Korea to give them information about American nuclear weapons in South Korea, pull out those weapons, and a guarantee from Washington that it will not use nuclear weapons against North Korea, reports news agency TASS, among other terms.

However, in the statement cited by TASS it also says that unless the U.S. agrees to these conditions, North Korea will continue to build up its nuclear forces—both in quality and quantity.

South Korea has welcomed the U.S. sanctions and hopes that they will raise international awareness of how serious North Korea’s human rights violations are.

It goes on to describe the political prison camps that are still in use in the country, holding family members and even children of those accused of crimes. The State Department estimates the number of prisoners to be between 80,000 and 120,000. Freedom of speech, media, expression, and religion are heavily restricted and guarded.

North Korean workers are often sent abroad to make money to send back to the homeland, in order to get around different sanctions, according to human rights groups cited by Huffington Post. These workers go to countries without much control over companies’ conditions, such as Poland or Russia. People work up to 70 hours a week without proper pay—most of the money is sent to the government—while their wives and children are held “hostage” in Pyongyang. If a worker defects, the family members are punished, or in a few extreme cases, killed.

What Do The Sanctions Mean?

The sanctions toward Kim Jong-un and the 10 other men are mostly symbolic, but mean that U.S. companies are prohibited from collaborating with any of the people on the list. U.S. companies can also not do any business with Kim Jong-un or any international companies that are under his control. Any assets belonging to Kim Jong-un in the U.S. will be frozen.

This could be the start of a wave of additional sanctions and have a worldwide effect, according to USA Today, since it would be risky for any international companies or banks to have anything to do with the individuals on the list. Hopefully it will push North Korea in the right direction. But analysts doubt it will have any effect on the leader, who just created a new State Affairs Commission that will take care of all national and foreign affairs. Who’s in charge of that? Kim Jong-un himself, of course.

Emma Von Zeipel
Emma Von Zeipel is a staff writer at Law Street Media. She is originally from one of the islands of Stockholm, Sweden. After working for Democratic Voice of Burma in Thailand, she ended up in New York City. She has a BA in journalism from Stockholm University and is passionate about human rights, good books, horses, and European chocolate. Contact Emma at EVonZeipel@LawStreetMedia.com.
Share:
Related ItemsDictatorshipHuman RightsHuman Rights AbuseKim Jong-UnNorth KoreaNuclear WeaponsSanctionsSouth KoreaU.S. Sanctions