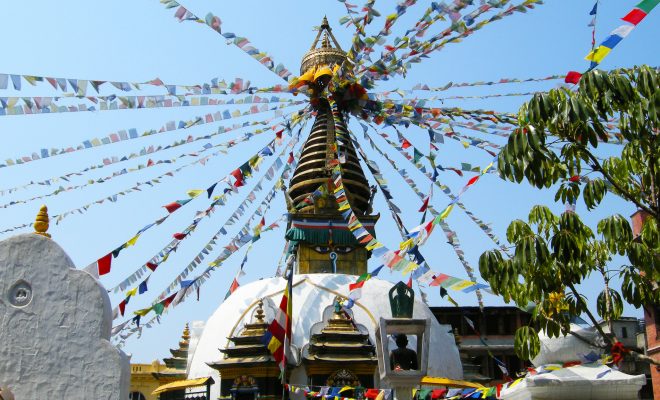 Nepali Workers Abroad are Dying at an Alarming Rate

For Nepali men, going abroad to work is often the only option they have to support their family. But doing so can come with great risk. Lately, many Nepali men have died under mysterious circumstances while working in other countries, and it seems to be part of a larger trend that strikes every decade or so. Since Nepal’s government started promoting foreign labor, the number of Nepali men trying their luck in other countries has increased a lot.

In total, more than 5,000 workers from the small country situated in between India and China have died since 2008. About 10 percent of Nepal’s 28 million people are working abroad and the money they send back amounts to almost a third of the country’s annual revenues.

These statistics could be enough to intimidate most from endeavoring on a journey across borders. But as Nepal is one of the poorest and least developed countries in the world, many have few alternatives to earn money. And because Nepali men are often willing to work hard under any circumstances, they are in high demand.

Qatar is preparing for the 2022 FIFA World Cup and has hired around 1.5 million immigrants from different countries. To make its citizens desirable for recruitment, the Nepali embassy in Doha even started advertising online, saying, “Nepalese workers are well known for their hard work, dedication, and loyalty.” The site goes on to say they are “comparatively cost effective and their hiring cost is lower as compared to other labour exporting countries,” and that they are “experienced in working in the extreme climatic conditions.”

Qatar has long promised to make conditions for migrant workers safer. But still, Nepali men working for the World Cup were dying at a rate of one man every two days in 2014. The government has been criticized for not doing enough to prevent this from happening. The men work long hours in temperatures that often reach 122 degrees Fahrenheit. “We know that people who work long hours in high temperatures are highly vulnerable to fatal heat strokes, so obviously these figures continue to cause alarm,” Nicholas McGeehan from Human Rights Watch told the Guardian.

Nepal only has one international airport, located in the capital, Kathmandu. About 1,500 workers fly out every day, and on average, three dead bodies come back. “The rate at which Nepali workers are dying abroad is alarming because they are too young to die,” said labor migration expert Ganesh Gurung to Nepali Times. Gurung added that it’s difficult to know the actual reason for the deaths, as autopsies are very rarely performed. Writing “natural causes” in the death certificate could be a way to cover up the real cause.

Many Nepali workers also end up taking on a lot of debt just to get a job abroad. Even though it’s illegal for employers to charge fees for work, both in Nepal and in Qatar, the costs can be high. The men need to get enough money to afford a plane ticket, pay a recruiter, and find a place to sleep. This means many work endless hours, live with a dozen or more men in one room, while also being the target of scammers. These brutal conditions might be a reason why otherwise healthy young men die. Nepal’s government even arranged for trucks to be retrofitted to carry coffins after deaths abroad increased.

Nepali migrant workers who return in coffins are too young and healthy to die https://t.co/kBjuq18Zkt @omastharai pic.twitter.com/fCLYMGDEws

Exactly how the young men die largely remains a mystery, as natural death, heart attack, or cardiac arrest are listed as the cause of death in about half of the cases. Many of them went to bed as usual, but never woke up in the morning. According to medical researchers, this is actually something that happens about every 10 years to healthy Asian men working away from their home countries. In the 1970’s, it was a problem in the U.S., in the 1980’s in Singapore, and later on in China. The phenomenon was named Sudden Unexplained Nocturnal Death Syndrome and next year an international effort plans to take a closer look at the phenomenon.

Patrick Clarkin at the University of Massachusetts told the AP that he could see a pattern in the Nepali workers. “I suspect that there would be little harm in improving the diets and living conditions of these young men. Something as simple as a multivitamin could go a long way and with little risk.” The difference in diet when going to another country could be an explanation, but also because even though they are working in the desert they drink less water than usual because, as Hindus, they are not allowed to use Muslim restrooms.

Nepali authorities blame stress and even homesickness. “I’m not trying to be insensitive but we have sent millions of workers to more than 100 countries, and so yes, sometimes people will die,” the spokeswoman for the Department of Foreign Employment, Rama Bhattarai, told the AP. “They die as foreign employees, they die here when a bus goes off a cliff.” The problem doesn’t seem to be taken as seriously as it should. But Krishna Dawadee, director of Kathmandu’s work permit center, wishes that it would. “These are our youth, draining out from our country. I am very much worried about these people,” she said. Hopefully, the international investigation will find out more about the cause in order to find a solution.

Emma Von Zeipel
Emma Von Zeipel is a staff writer at Law Street Media. She is originally from one of the islands of Stockholm, Sweden. After working for Democratic Voice of Burma in Thailand, she ended up in New York City. She has a BA in journalism from Stockholm University and is passionate about human rights, good books, horses, and European chocolate. Contact Emma at EVonZeipel@LawStreetMedia.com.
Share:
Related ItemsAsiaDeathHuman RightsImmigrantsMigrant WorkersNepalNepali WorkersQatarWorld Cup 2022