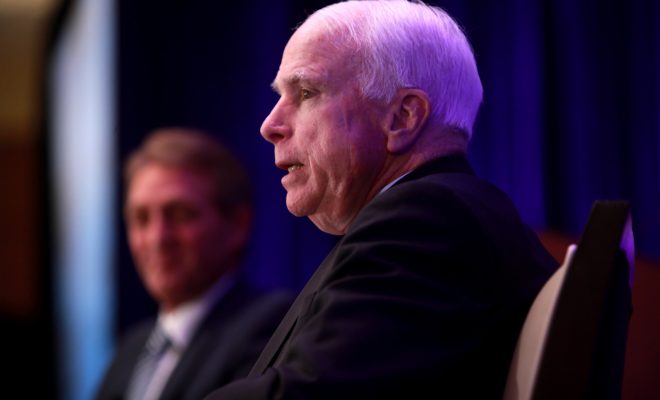 After the tragic death of University of Virginia student Otto Warmbier following his release from North Korea, Arizona Senator John McCain wants to reform the system of tourism to the totalitarian country.

McCain, the chairman of the Senate Armed Services Committee, said that North Korea “murdered” Warmbier and that Americans who are “stupid” enough to travel to the dangerous country despite State Department warnings should sign a waiver clearing the United States of any blame should they get in trouble.

Approximately 800 Americans visit North Korea each year. There are several tour companies that help these curious American travel the country, but many are now questioning whether they should accept Americans for future trips.

Warmbier was sentenced to 15 years of hard labor after he was convicted of stealing a propaganda sign while on vacation there. He was in a coma when North Korea released him to the United States and less than a week after his return, the 22-year old passed away in Cincinnati, Ohio.

McCain expanded on his thoughts in an interview with the Associated Press:

“I think we should strongly consider it,” Corker said. “It puts us in a really precarious situation when Americans are detained there.”

McCain also used his platform to remind the American public that Warmbier experienced just a bit of the “forced labor, mass starvation, systematic cruelty, torture, and murder” that the North Korean population has had to endure for decades.

McCain said that while he doesn’t wish ill on anyone, he hopes that those who visit North Korea in future years will “assume the responsibility of their welfare.”

These ideas for reform haven’t been turned into concrete legislation, but they are powerful comments from politicians who serve in key roles on congressional committees.

Whether either McCain’s or Corker’s proposals become reality remains to be seen, but Warmbier’s death likely will have consequences for American tourism to North Korea.

Josh Schmidt
Josh Schmidt is an editorial intern and is a native of the Washington D.C Metropolitan area. He is working towards a degree in multi-platform journalism with a minor in history at nearby University of Maryland. Contact Josh at staff@LawStreetMedia.com.
Share:
Related ItemsInternational TravelJohn McCainNorth KoreaTourismTravel Advisory