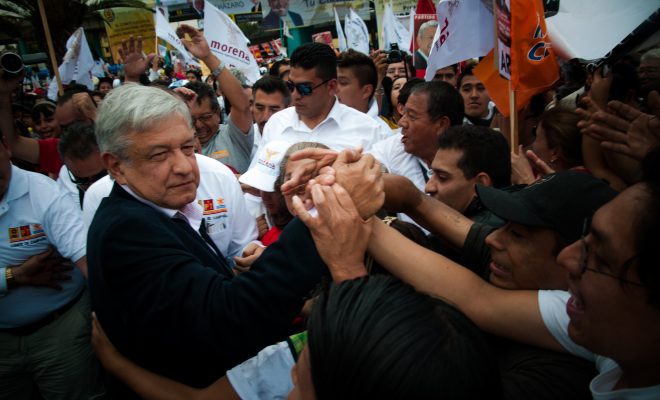 In a press conference at the National Press Club, López Obrador and his team announced that the petition challenged Trump’s anti-immigration executive orders. While the petition lists 30 specific cases involving Mexican and Guatemalan citizens, López Obrador’s team claimed to be acting on behalf of immigrants around the world.

Signed by over 12,000 Mexican and American citizens, the petition will be placed under initial review. If the IACHR allows it proceed, the case could go before the Inter-American Court of Human Rights. However, even if the court denounces the U.S., such a ruling would have little, if any, effect.

It is unlikely that López Obrador submitted the petition with the intention of mounting a genuine legal challenge. He will be well aware that U.S. is not beholden to IACHR rulings. However, by submitting the petition, the left-wing politician has cast himself as a determined political opponent of Trump. Though candidates for the Mexican presidential race are not expected to file until the summer, López Obrador has been working to drum up early support and currently leads opinion polls.

While the extremely unpopular Mexican President Enrique Peña Nieto received an outpouring of support  after he canceled a meeting with Trump, his approval rating has since dropped to a record low. López Obrador is promising a platform that stands to the left of the president’s Institutional Revolutionary Party.

Speaking at the National Press Club, López Obrador said he was “disappointed” with how Peña Nieto handled early conversations with Trump. He accused the Mexican president of “submitting” to the U.S. by agreeing to avoid publicly discussing Trump’s proposed border wall and immigration policies. López Obrador declared that Mexico “is not a colony” and that the two countries “need a relationship based on respect not force.”

Riding the same wave of anti-establishment sentiment that propelled Trump to the White House, López Obrador is a refreshing alternative to many who are tired of the status quo. Though largely symbolic, López Obrador’s petition sends a clear statement of intent to both those in Mexico and those in the U.S.

Callum Cleary
Callum is an editorial intern at Law Street. He is from Portland OR by way of the United Kingdom. He is a senior at American University double majoring in International Studies and Philosophy with a focus on social justice in Latin America. Contact Callum at Staff@LawStreetMedia.com.
Share:
Related ItemsAndrés Manuel López ObradorBorder WallDonald TrumpExecutive OrdersHuman RightsImmigrant RightsLópez ObradorMexicoPeña Nieto