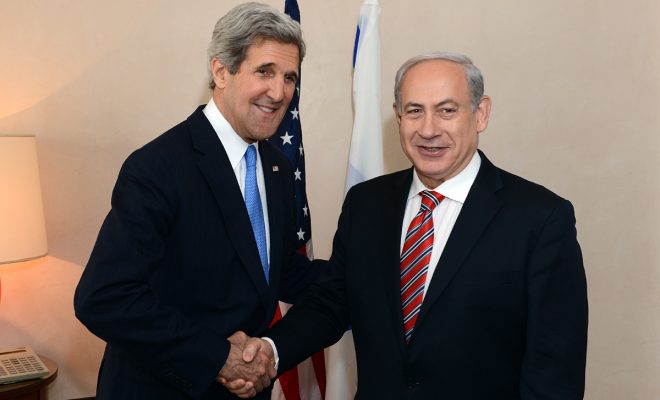 In a lengthy and detailed speech on Wednesday, Secretary of State John Kerry defended the U.S.’s decision to abstain from a vote condemning Israeli settlements in the West Bank and advocated for a two-state solution as the path to peace in the Arab-Israeli conflict.

Kerry affirmed the Obama administration’s commitment to Israel, describing the relationship as a friendship but declaring that friends “need to tell each other the hard truths.” He then went on to assert that the U.S. did indeed vote in accordance with its values, declaring that a vote against the settlements would jeopardize a two-state solution, which he described as the “only way to ensure Israel’s future as a Jewish and democratic state.”

The speech comes in the wake of a wave of criticism from President-elect Donald Trump and the dismay of pro-Israel advocates who called upon the U.S. to veto the U.N. resolution. The U.N. resolution declared the settlements a violation of international law, and were not vetoed by any of the five permanent members of the U.N. Security Council.

Simply the announcement of Kerry’s planned speech was enough to draw ire from many public figures, who believed the U.N. vote showed a disloyalty to the U.S.-Israeli relationship.

After allowing this anti-Israel resolution to pass the UN, Secretary Kerry has no credibility to speak on Israeli-Palestinian peace.

We cannot continue to let Israel be treated with such total disdain and disrespect. They used to have a great friend in the U.S., but…….

not anymore. The beginning of the end was the horrible Iran deal, and now this (U.N.)! Stay strong Israel, January 20th is fast approaching!

Kerry said he felt “compelled” to respond in the wake of the backlash, stressing the U.S.’s continued support for Israel but taking a hard stance against the West Bank settlements. He also said that if Israel went down the one-state path, “it will never have true peace with the rest of the Arab world.” He outlined principles for negotiations between the two parties, declaring that both sides must be actively involved in the peace process in order for it to be effective.

Israeli Prime Minister Benjamin Netanyahu called the speech a “deep disappointment” during a news conference on Wednesday, saying that it “was almost as unbalanced as the anti-Israel resolution” passed by the U.N. last week. He also allegedly vowed to work with the Trump administration to repeal the U.N. resolution.

While it is unlikely that the speech could substantially change Israeli policies in the region, it sent a powerful statement that the Obama administration was standing by its vote at the U.N. despite opposition from Israel.

While the Trump administration has vowed to strengthen the alliance between the two countries further, Secretary Kerry’s speech has essentially cemented the Obama administration’s legacy as one with a tenuous relationship to Israel and Netanyahu: keeping amicable terms, but refusing to bend to its every demand.

Mariam Jaffery
Mariam was an Executive Assistant at Law Street Media and a native of Northern Virginia. She has a B.A. in International Affairs with a minor in Business Administration from George Washington University. Contact Mariam at mjaffery@lawstreetmedia.com.
Share:
Related ItemsArab-Israeli ConflictBenjamin NetanyahuDonald TrumpIsraelJohn kerryPalestineSecretary of StateUnited NationsWest Bank