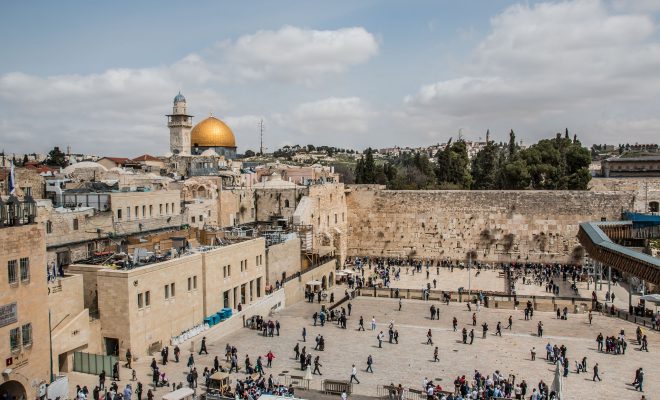 "Western Wall and Dome of the Rock Jerusalem Israel-15" Courtesy of Gary Bembridge: License (CC BY 2.0)

On Sunday, Israeli Prime Minister Benjamin Netanyahu backtracked on an agreement he made last year to create an egalitarian space at the Western Wall. He said he would seek what he feels is a better compromise between liberal progressive Jews and ultra-Orthodox Jews. Netanyahu decided to scrap the bill despite previously calling the solution a “fair and creative solution,” according to the Washington Post.

The Western Wall, or the “Kotel” in Hebrew, is one of the holiest sites in the world, and the holiest site for the Jewish people. It marks the only remaining ruins of the second Jewish temple in Jerusalem. The first temple was destroyed by the Babylonians in the sixth century BCE, according to the biblical account. A second temple was built a few decades later, and was ransacked and destroyed by the Romans in 70 CE.

For years, Jews and tourists from across the globe have traveled to the last remaining wall of the second temple in order to pray and stuff personal notes into the wall’s cracks. But one issue that has stemmed from this tradition is the wall’s gender divided prayer space. Men are allotted about 75 percent of the space, while women are granted a much smaller section.

Israel’s reform and conservative movements, together with Women of the Wall, an Israeli feminist organization, filed an official petition in September to reconfigure the prayer space. This action angered the ultra-Orthodox and decreased the chances for compromise, Israeli Interior Minister Aryeh Deri said.

Senior minister Tzachi Hanegbi has been appointed to seek an alternative solution. Netanyahu plans to meet with senior officials of the bipartisan American Israel Public Affairs Committee (AIPAC). AIPAC President Lillian Pinkus and CEO Howard Kohr made an emergency visit to Jerusalem on Wednesday in order to meet with Israel’s leader, according to Haaretz.

AIPAC released a one-sentence statement expressing its faith in Israel’s democracy as “the best hope for a productive outcome,” according to Haaretz. Netanyahu opted not to meet with American reform and conservative Jewish leaders despite them being in Jerusalem for the Jewish Agency’s Board of Governors summit, according to Times of Israel.

While the ultra-Orthodox community was delighted by Netanyahu’s backtracking, the decision was met with outrage from many Jews in Israel and around the world. In recent years, Women of the Wall has emerged to campaign for changes. The progressive group has advocated for a more egalitarian space at the Western Wall where husbands, wives, and children can pray together instead of being separated by a barrier. Anat Hoffman, director of Women of the Wall, wrote:

This is a bad day for women in Israel. The Women of the Wall will continue to worship at the women’s section of the Western Wall with the Torah scroll, prayer shawls and phylacteries until equality for women arrives at the wall as well.

The reason the barrier is there in the first place is to appease ultra-Orthodox Jews who adhere to the separation of the sexes. At Orthodox synagogues there are “mechitza’s” which separate the men and women during prayer.

Women are not permitted to read aloud from the Torah, wear prayer shawls (talit) or sing at the Western Wall. Women of the Wall also considers it a priority to change those restrictions.

Even some within the Israeli government spoke out against Netanyahu’s decision. Defense Minister Avigdor Lieberman said that the prime minister’s choice “causes terrible harm to Jewish unity and to the alliance between the State of Israel and Diaspora Jewry,” according to the Washington Post.

Yaakov Katz, the editor in chief of The Jerusalem Post, wrote a column saying, “Sunday will go down in history as a shameful day for the State of Israel, another nail in the coffin of Israel’s failing relationship with Diaspora Jewry.” Clearly, many Jews in Israel and those living outside the country have had strong negative reactions to Netanyahu’s decision.

Multiple Jewish groups have announced that they will reconsider their relationship with Israel. The board of directors for the non-profit Jewish Agency canceled a dinner that was planned with Netanyahu, according to San Francisco Gate. Additionally, Rabbi Rick Jacobs, the president of the Union for Reform Judaism, said he felt betrayed. Since Jacobs sees no point in meeting with Netanyahu at this point, the Union would instead prepare for future debates, according to Times of Israel.

Newly minted ambassador to Israel David Friedman spoke about the controversy while at an event in Jerusalem. Friedman said he understood the frustration, but called for unity and understanding between the two sides, according to Haaretz.

Netanyahu’s decision on the Western Wall represents a huge divide between ultra-Orthodox Israeli Jews and non-Orthodox Jews in Israel and around the world. Many American Jews have become frustrated with Netanyahu and the Israeli government in recent years, so this abandonment will only fuel those flames.

Now, the two sides must sit back down and find a compromise. It remains to be seen when a new deal will be reached, but the path there will surely be contentious.

“These negotiations were reached by listening to each other, mutual understanding… The [prime minister] initiated the negotiations and promised us and inspired us and now in one quick swoop without any warning stopped it all,” Hoffman, director of Women of the Wall, said.

Josh Schmidt
Josh Schmidt is an editorial intern and is a native of the Washington D.C Metropolitan area. He is working towards a degree in multi-platform journalism with a minor in history at nearby University of Maryland. Contact Josh at staff@LawStreetMedia.com.
Share:
Related ItemsAIPACBenjamin NetanyahuConservative JudaismFeminismGender EqualityIsraelJerusalemOrthodox JudaismPrayerReform JudaismReligionWestern Wall