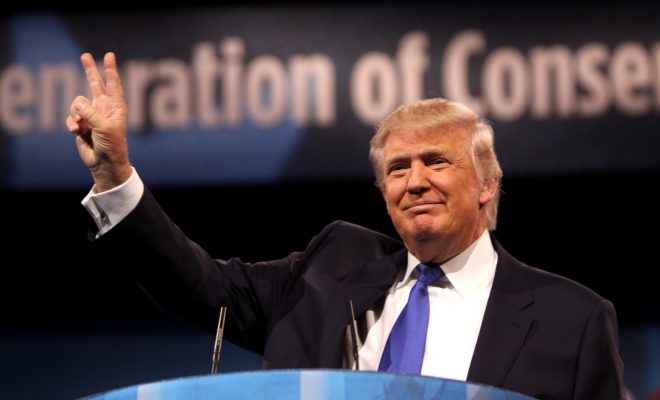 On Friday, some Arabs praised President Donald Trump on social media after his attack on Syria. On Thursday night, Trump authorized America’s first direct military action against Syria, in retaliation for the Syrian government’s chemical weapons attack against its own people. It was an unexpected move that brought forth condemnation from Russia, praise from fellow Republicans, and a whole host of other reactions worldwide.

Many Arab social media users called Trump Abu Ivanka–“Father of Ivanka.” The nickname is a sign of respect and endearment. Some also referred to him as Abu Ivanka al-Amreeki–Father of Ivanka the American, and photoshopped a picture of him so that it looked like he had a full beard.

One Facebook user gave Trump another kind of makeover wearing a traditional tarboosh hat and wrote, “We love you.” Another one called him a “man of his words” and said that he managed to do what Obama couldn’t in eight years.

It may seem bizarre that many people in majority Muslim countries are praising Trump after he announced a ban on Muslim refugees and immigrants. But U.S. allies across the Middle East that were angered when Obama didn’t act more forcefully against Iran to limit its nuclear program or stand against the Syrian government now may see Trump as a more decisive leader.

Many lavished Trump with praise, seemingly with the hope that this marks a shift in the U.S. approach to the conflict in Syria. Israel was also complimentary. Prime Minister Benjamin Netanyahu said that Trump’s actions would send a “message of resolve in the face of the Assad regime’s horrific actions.” However, U.S. officials have not indicated the missile launch is a part of a bigger program–instead the move may just be considered a warning.

“People are jubilant in the Gulf right now,” said Saudi-Arabian Mohammed Alyahya, a fellow at the Atlantic Council, to the New York Times.  “What is clear is that Trump understands what American power can change and is willing to use it.”

“Everyone here in Khan Sheikhoun is happy. It is revenge for the families of the victims,” said Yasser Sarmini, a rebel fighter in the Syrian town of Khan Sheikhoun that was hit by the latest chemical attack.

However, despite an unusual amount of international support for Trump, many people also criticized his actions. One blogger named Karl Sharro wrote that Trump, in the true tradition of U.S: politics, had discovered that when things go wrong at home you can always “start a military venture in the Middle East.”

Emma Von Zeipel
Emma Von Zeipel is a staff writer at Law Street Media. She is originally from one of the islands of Stockholm, Sweden. After working for Democratic Voice of Burma in Thailand, she ended up in New York City. She has a BA in journalism from Stockholm University and is passionate about human rights, good books, horses, and European chocolate. Contact Emma at EVonZeipel@LawStreetMedia.com.
Share:
Related ItemsArabChemical Weapons AttackDonald TrumpMissile StrikeMuslimsPraiseSyria