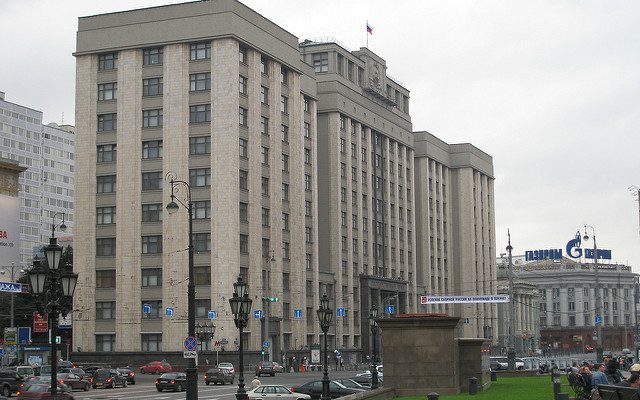 The State Duma of Russia Courtesy of Bernt Rostad : License (CC BY 2.0)

Bill Aims to Decriminalize Some Domestic Violence in Russia

Russian Deputy Minister Yelena Mizulina submitted a bill to the State Duma, Russia’s lower house of parliament, that would decriminalize some acts of domestic violence. If passed, the law would protect abusers found guilty of domestic abuse for the first time, as long as the attack did not cause serious harm and excluded rape.

The ultra-conservative lawmaker, who  claimed the bill defends “traditional family culture,” said people should not be jailed or considered a criminal for “a slap.” Unsurprisingly, Mizulina is also the author of the “gay propaganda bill,” which has greatly restricted the rights of LBGTQ people. This law was similarly justified by claims that it defended traditional families.

The Duma, dominated by President Vladimir Putin’s United Russia party, overwhelmingly supported the legislation, dubbed the “slapping bill” by Russian media. Of the Duma’s 450 MPs, 368 voted in favor of the law after its first reading. The law stands in opposition to one passed last July that criminalized acts of violence against family members. This complete 180 is believed to be a means of appeasing the ultra-conservative faction within United Russia.

While there is little data available on domestic violence in Russia, a report by the ANNA National Centre for the Prevention of Violence estimates that violence occurs in one in four households, two-thirds of murders are domestic, 14,000 women a year are killed by their husbands or other relatives, and up to 40 percent of violent crimes are family related. Meanwhile, the city of Moscow only has one state-funded refuge for victims of domestic violence.

The bill has outraged many in Russia but the government has already moved to silence opposition. Groups wishing to protest in Russia must file for permits. While activists requested permission to protest, their requests for permits were denied on the grounds that a protest would disrupt traffic and pedestrians.

The sizable United Russia majority is likely to push the bill through subsequent votes with ease before they send it to the upper chamber for a final vote.

Callum Cleary
Callum is an editorial intern at Law Street. He is from Portland OR by way of the United Kingdom. He is a senior at American University double majoring in International Studies and Philosophy with a focus on social justice in Latin America. Contact Callum at Staff@LawStreetMedia.com.
Share:
Related ItemsDomestic ViolenceHuman RightsRussiaRussian ParliamentSlapping BillState DumaYelena Mizulina