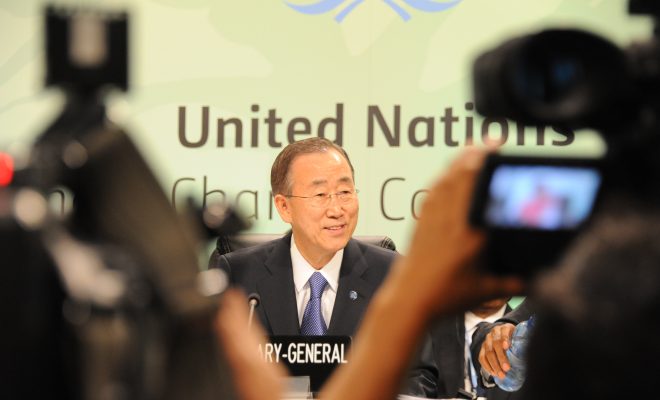 Will Ban Ki-moon’s Family Cost Him a Presidential Bid?

Former UN Secretary General Ban Ki-moon is in the spotlight this week after U.S. prosecutors accused his brother and nephew of conspiring to bribe a government official while he was at the UN. Ban Ki Sang and his son Joo Hyun Bahn allegedly orchestrated a $500,000 bribe to a Middle Eastern official for the purchase of the Landmark 72 skyscraper in Vietnam.

According to the allegations, the initial payment was meant to be followed by a secondary bribe of $2 million after the sale. The identity and nationality of the official the two attempted to bribe has not been disclosed, but the middleman in the deal has been identified as U.S. businessman Malcolm Harris, who apparently took the first bribe but spent it himself rather than passing it along to the official. Harris is currently at large but Bahn and his associate Sang Woo were arrested for violating the Foreign Corrupt Practices Act, which prohibits bribing foreign officials.  Bahn, who was slated to serve as an adjunct professor at NYU, has been stripped of his position but has been let out on bail and will remain within the U.S. for a federal trial.

Ban Ki-moon has publicly stated that he is “perplexed and embarrassed” by the bribery accusations but even if he distances himself from his relatives, the charges against them may still destroy his chances of becoming South Korea’s president. In the wake of President Park Geun-hye’s impeachment the South Korean electorate will be hyper sensitive to any scandal or implication of corruption among the candidates running to fill the presidential seat.  It still remains to be seen if the president’s impeachment will be upheld by the constitutional court, but in the court of public opinion, Park Geun-hye has already been transformed into a monster.

Voters will be looking for an inspirational and trustworthy leader to provide them with a presidential campaign reminiscent of President Barack Obama’s messages of hope and change in 2008. Ban Ki-moon has an unparalleled record of public service and a wealth of experience, but the investigation into his family could very easily become the central story of his campaign.  In the same way that Republican candidates made Hillary Clinton’s use of a private server during her time as secretary of state central to their campaigns, Ban Ki-moon’s opponents may seize on this scandal in an attempt to impugn his character (despite the fact that he was not named in the indictment or charged in any way).

Ban Ki-moon seems like the obvious choice for the South Korean presidency, but he may face strong competition from Moon Jae-in, a social liberal who has called for large-scale corporate reform and an increased dialogue with North Korea, especially regarding their nuclear program. Lee Jae-myung, mayor of the city of Seongnam, who like Moon Jae-in is a member of the liberal Minjoo Party, has also been tapped to run. The bribery scandal may fade into the background as Ban Ki-moon picks up steam and rests on his already sky-high approval rankings, but if we learned anything from 2016, it was that elections are far less predictable that we like to think.

Jillian Sequeira
Jillian Sequeira was a member of the College of William and Mary Class of 2016, with a double major in Government and Italian. When she’s not blogging, she’s photographing graffiti around the world and worshiping at the altar of Elon Musk and all things Tesla. Contact Jillian at Staff@LawStreetMedia.com
Share:
Related ItemsBan Ki-MoonUnited NationsUnited Nations Ban Ki-Moon