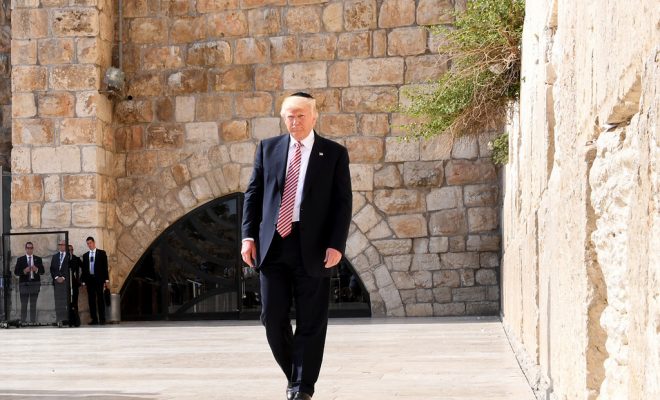 Trump to Keep U.S. Embassy in Tel Aviv: What You Need to Know

Few cities have caused as many headaches as Jerusalem. On Thursday, President Donald Trump continued in the tradition of his predecessors in keeping the U.S. embassy in Tel Aviv, Israel’s metropolis on the Mediterranean, rather than moving it to Jerusalem, Israel’s proclaimed undivided capital. In the wake of Trump’s announcement, social media has seemingly come to a consensus: Trump broke a campaign promise. Sure, he did. But like everything else involving Jerusalem, it’s not that simple.

Status of the Holy City

When the United Nations officially recognized the State of Israel in 1947, it also sought to designate Jerusalem “corpus separatum,” or an international protectorate, apart from the Arab and Jewish states being created between the Jordan River to the east and the Mediterranean to the west. That did not happen. Instead, after Israel officially declared itself a sovereign nation in May 1948, an attack was launched–Arab armies assaulted Israel, which eventually won the war.

But Jerusalem, which saw heavy fighting in the war, was split: Jordan captured the eastern half, which contains Judaism’s holiest sites (as well as Islamic and Christian holy sites), while Israel held onto the western half. Jordan governed the Holy City for nearly two decades. Under Jordanian rule, Jews were not allowed to visit their holiest site, the Western Wall. Jewish synagogues and cemeteries were destroyed or deconstructed. In the 1948-49 war, Jordan also captured the West Bank.

The Six-Day War in 1967 changed the status of Jerusalem, and shifted the conversation for decades to come. Israel captured a number of land parcels during the war: the Gaza Strip from Egypt; the Golan Heights from Syria; and the West Bank and east Jerusalem from Jordan. Soon after, Israel annexed the Golan Heights and east Jerusalem, moves that the international community did not–and still does not–recognize. Since then, all of Jerusalem–save the Temple Mount, a holy site for all Abrahamic faiths, which remains in Jordan’s hands–has belonged to Israel, which deems the city its undivided, eternal capital.

The U.S., like all other countries, has kept its embassy in Tel Aviv for decades. Israel has urged U.S. presidents to move the embassy to Jerusalem, home to Israel’s parliament, Supreme Court, and numerous cultural and business institutions. In 1995, the Clinton Administration signed a bill that set a clear path for the embassy move.

The Jerusalem Embassy Act of 1995 found that the U.S. “maintains its embassy in the functioning capital of every country except in the case of our democratic friend and strategic ally, the State of Israel.” The bill continued: “The United States conducts official meetings and other business in the city of Jerusalem in de facto recognition of its status as the capital of Israel.”

The bill dictated that the U.S. move its embassy from Tel Aviv to Jerusalem by May 31, 1999. However, it also allowed presidents to waive the move, if it “is necessary to protect the national security interests of the United States.” Like Bill Clinton and George W. Bush, Trump made a campaign promise to move the embassy. But on Thursday, despite his firm insistence he would buck the trend and actually go ahead with the move, Trump decided to renew the waiver, which will last for six months.

Despite delaying the embassy move, a White House statement said, “no one should consider this step to be in any way a retreat from the President’s strong support for Israel and for the United States-Israel alliance.” It continued: “President Trump made this decision to maximize the chances of successfully negotiating a deal between Israel and the Palestinians, fulfilling his solemn obligation to defend America’s national security interests.” The White House said “the question is not if that move happens, but only when.”

Israeli Prime Minister Benjamin Netanyahu expressed disappointment, but reiterated the U.S.-Israel partnership. A statement from his office said: “Though Israel is disappointed that the embassy will not move at this time, we appreciate today’s expression of President Trump’s friendship to Israel and his commitment to moving the embassy in the future.”

1. Trump was right to issue the Jerusalem embassy waiver today. But I hope it’s the last waiver, allowing the move later this year.

He said Trump has leverage in the peace negotiations between Israel and the Palestinians, and a hasty move could have squandered trust. Shapiro said that once all sides, including Sunni Arab countries like Saudi Arabia and Jordan, are on the same page, then the embassy move would be prudent:

6. Then establish the embassy in W Jerusalem. Shatter Pal myth that Israel has no Jerusalem claims & treat Jerusalem as the capital it is.