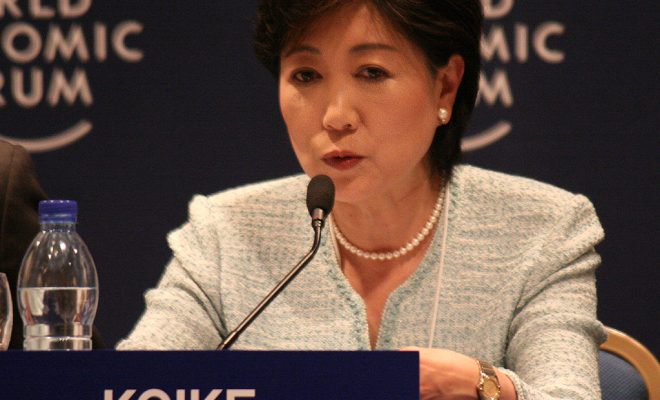 The 2020 Olympics and Feminism: Yuriko Koike in the Spotlight

The voters of Tokyo made history this month, voting in Yuriko Koike as their first female governor. Koike ran as an independent, which isolated her from her former allies in the Liberal Democratic Party, but ultimately served her well, as she won in a landslide. Koike’s political attitudes fall in line with that of the Liberal Democrat Party (LDP) but her frosty personal relationships with party leadership kept her out of favor for years. Koike has been a trailblazer in her time, serving as Japan’s first female defense chief and not shying away from feminism, encouraging female politicians to be involved in more than “women’s issues” and challenging her male peers to place women on an equal level.

Koike is now tasked with managing the 2020 Olympic Games in Tokyo, a task that is always challenging but which will be especially difficult in the wake of the Rio Games, which were labeled a disaster before the Opening Ceremonies even began. But the LDP will have control over Koike’s budget for the 2020 Games, and there is suspicion that it will use its financial power to punish her for her break with the party.

During her campaign for governor, Koike pledged to review the budget for the Olympics, suggesting that her predecessors were overspending–a feasible assumption considering that governor Masuzoe stepped down earlier this summer after allegations of massive misappropriations of political funds. Masuzoe denied breaking the law but did admit to several ethical violations regarding the funding of the Games. As Koike takes office, the 2020 Games have been forecast to cost at least double if not more the original budget of $7 billion. It is not uncommon for nations to spend over $14 billion to host the Olympics, which raises questions about why Koike’s predecessors set the original budget so low. The games already face difficulties, as construction of the central stadium has been pushed back and the original logo was left behind after accusations of plagiarism.

There is already chatter in the political world about Koike running for Prime Minister, but that bid can likely only come after she proves herself as governor. At this moment, with Olympic pride at fever pitch, the 2020 Games are central to her success not only as a governor but as a female politician in an arena dominated by males. She will need to manage the building of new infrastructure, a massive influx of tourism and coordination across dozens of different athletics organizations–all the while protecting Olympic sites from terrorist attacks and staying away from the human rights abuses that have plagued Rio.

Dilma Rousseff, Brazil’s recently impeached president, may not have set a high standard to live up to but Koike will need to deliver an excellent Olympics if she wants to push back against both personal criticism against her from the LDP and larger prejudices against women in offices of power. Japan has long undervalued its female population, and Koike seeks to integrate more women into the workforce, simultaneously stimulating the economy and changing attitudes about women’s value. Koike has pledged to improve daycare and care for the elderly, freeing up women from caretaker roles they have historically occupied out of duty and pushing them into the workforce. She has not yet announced major appointments to her organizational team, but imagine the potential: an Olympics where the decision-makers are women. Koike will need to work with only the most qualified advisors, but if she chooses to open the door to more female politicians and organizers, she may deliver the most equitable Olympics yet.

Jillian Sequeira
Jillian Sequeira was a member of the College of William and Mary Class of 2016, with a double major in Government and Italian. When she’s not blogging, she’s photographing graffiti around the world and worshiping at the altar of Elon Musk and all things Tesla. Contact Jillian at Staff@LawStreetMedia.com
Share:
Related Items2020 OlympicsElectionFemale EmpowermentGovernorJapanTokyoYuriko Koike