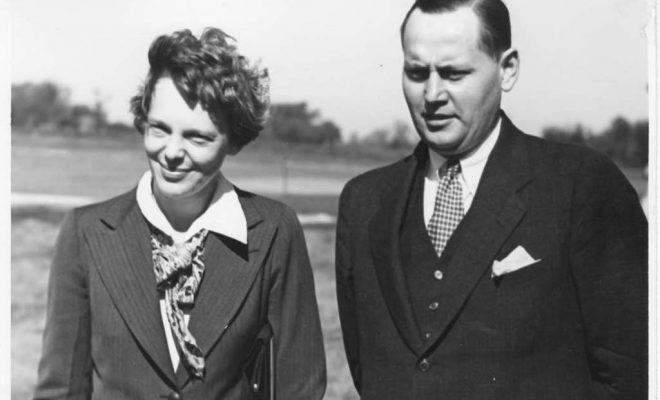 Was Amelia Earhart Captured by Japan?

One of America’s most enduring mysteries is what happened to Amelia Earhart after she attempted to become the first female pilot to fly around the world in 1937. Earhart, and her navigator Fred Noonan, seemingly vanished over the Pacific Ocean, and concrete evidence of a crash was never discovered.

But now, researchers may have a new theory. A previously classified photo was discovered at the National Archives which appears to show a short-haired woman sitting on a dock looking at a boat towing a plane that is 38 feet long– the same length as Earhart’s plane. With her back turned to the camera, the woman’s identity is unclear, but her short hair and height match Earhart, according to the Washington Post.

Additionally, there is a man in the picture whose nose and hair match up perfectly with Noonan, in the opinion of a facial recognition expert. Their location would make sense since the small islands could have been along the path that Earhart took before disappearing over the Pacific. The tweet below identifies the two subjects:

Holy crap, there may be new evidence that Amelia Earhart didn’t die in that plane crash https://t.co/RF3xT9jR1Z pic.twitter.com/2JFg00Ot9E

The photo was discovered by former U.S. Treasury agent Les Kinney. It will be featured as part of an upcoming History Channel documentary titled “Amelia Earhart: The Lost Evidence.”  In order to ensure the authenticity of the photograph, it was examined by two independent photo experts who confirmed it was not distorted, according to the Washington Post.

At first, Shawn Henry, a former FBI assistant executive director who is now helping privately investigate the Earhart disappearance, was skeptical of the photo. But once he saw the woman wearing what appear to be Earhart’s trademark pants, his opinion changed.

“I’m looking at her sitting on the dock and thinking, ‘This is her,’” he said.

One of the theories is that Earhart and Noonan were held in Japanese custody after crashing in Japanese territory. Kinney believes that this photo is as close to a smoking gun as has ever been discovered in this decades-long investigation.

“We believe that the Koshu took her to Saipan [in the Mariana Islands], and that she died there under the custody of the Japanese,” said Gary Tarpinian, the executive producer of the special.

After finding the photo–the location pictured is Jaliut Harbor on Jaluit Island, Henry traveled to the Marshall Islands to speak with those who claim that Earhart did in fact visit there. Henry spoke with the son of one man who claimed to have seen Earhart in Mili Atoll in 1937. He also met the last living person who claims to have seen the duo after their arrival, according to the Washington Post. While these stories are inconclusive when considered alone, Henry believes that they corroborate the picture and that all combined we have “proof beyond a reasonable doubt.”

Japanese authorities did tell NBC News they have no record of Earhart ever being in their custody. However, many documents were lost after the islands switched from German to Japanese ownership, according to BBC.

Japanese explorers first arrived at the islands in the 19th century, but the first permanent settlements were created in the 1920s. The person who took this picture is believed to have been a American spy who was keeping tabs on Japanese military activity in the Pacific, according to NBC News. Japanese power over the region ended after the nation’s surrender in World War II. So, there is the possibility that Imperial Japan did keep Earhart and Noonan in its custody up until that point.

The mystery may never be solved, but this photograph is essentially the only concrete evidence ever discovered, and it has reignited the mystery.

Josh Schmidt
Josh Schmidt is an editorial intern and is a native of the Washington D.C Metropolitan area. He is working towards a degree in multi-platform journalism with a minor in history at nearby University of Maryland. Contact Josh at staff@LawStreetMedia.com.
Share:
Related ItemsAmelia EarhartAviationDiplomacyHistoryJapanMarshall IslandsMysteryPacific OceanUnited States