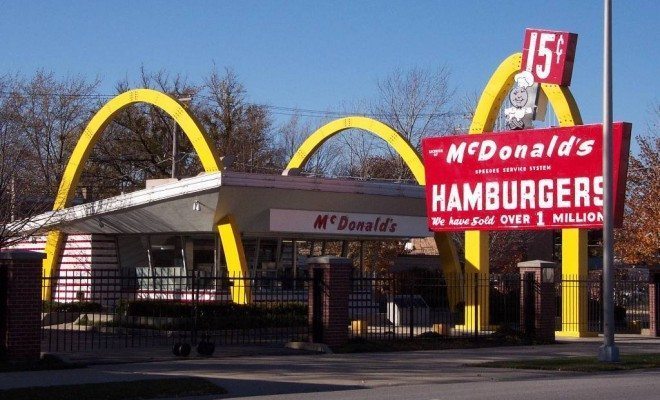 It seems that McDonald’s will change its slogan yet again ever so slightly by making it just a little bit worse. Now, instead of hearing the phrase “I’m lovin’ it” to accompany the iconic Golden Arches, you will hear “Lovin’ Beats Hatin’.” What’s with McDonald’s and bad grammar, anyway? Starting next year, the McDonalds catchphrase will be all about stating the obvious.

Not anymore, I’m not. Courtesy of Gabby Kaminsky via Flickr.

Personally, I am unsure as to what McDonald’s marketing experts wish to accomplish with this change. Are they trying to be progressive? Like, 1970s Beatles-style let’s all love everyone and sit in a hippie drum circle? I mean, don’t most people worldwide kind of know that treating others with love is better than the alternative? It’s something they tell us in preschool in the U.S., anyway.

Well, I guess it’s not such an obvious thing since there is so much war, hate, turmoil, and all that in the world today. Ah, I think I understand now! McDonald’s is trying to create world peace by telling others to LOVE not HATE! Wow, McDonald’s, that is such a noble task you are trying to undertake! The collective imagination behind the new catchphrase will single-handedly bring peace to the Middle East, thus earning its creators the Nobel Peace Prize. Okay, maybe I am exaggerating a bit…

Or perhaps I am misunderstanding the objective. Maybe it’s as simple as trying to drum up some competition among the foods offered at McDonald’s to keep things interesting. Dollar-Menu burgers versus six-piece chicken nuggets. Which are you lovin’ and which are you hatin’? Maybe consumers are lovin’ egg McMuffins and hatin’ Japan’s exclusive squid-ink burger. Personally, I am just sick and tired of the fast food giant omitting the “g” at the end of the words. I draw a blank as to the reasoning behind that one…

According to McDonald’s big wigs themselves, the campaign is designed to “spread happiness in the face of Internet hate.” There wasn’t any more elaboration than that, but they have admitted that the company is in for big changes.

Why? Sales are down for the fast food chain due to its failure to keep up with modern eating habits worldwide. Also, the company claims that introducing too many new items too quickly last year caused a decline in revenue. The mentality of consumers seems to be changing, too; whereas consistency was previously looked at positively, today’s consumer prefers customization with their orders. Thus, the true motive behind the new slogan. Though perhaps the campaign change will not boost sales as intended, only time will tell, the company made a smart move by deciding to unveil the new slogan during the next Super Bowl.

So, McDonald’s, I’m “lovin’” that you’re trying to adapt, but I’m “dislikin’” your proposed new slogan. It leaves me “wantin’” some more creativity. Okay, sorry, I’m done bothering everyone with poor grammar.

Marisa Mostek
Marisa Mostek loves globetrotting and writing, so she is living the dream by writing while living abroad in Japan and working as an English teacher. Marisa received her undergraduate degree from the University of Colorado in Boulder and a certificate in journalism from UCLA. Contact Marisa at staff@LawStreetMedia.com.
Share:
Related ItemsCatchphraseFast FoodGolden ArchesI'm Lovin' ItLovin' Not Hatin'McDonaldsMickey D'sRestaurantsSalesSlogans