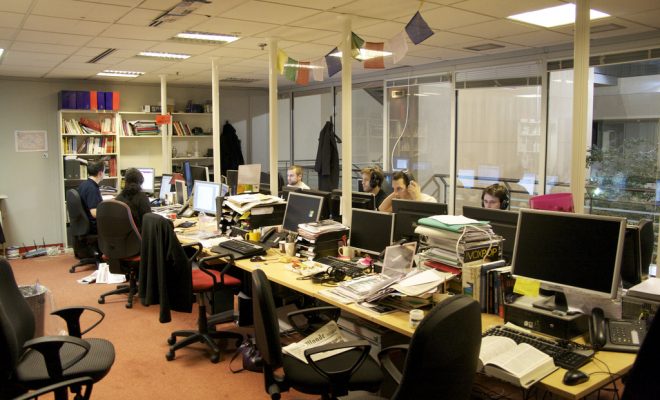 "5.31am CET - lepoint.fr newsroom" courtesy of [Gabriel Jorby via Flickr]

Did Martin Shkreli Start a Massive Email Chain With 450 Reporters?

Did Martin Shkreli send a mass email to just over 450 journalists about the recent Wu-Tang Clan album on Friday? That’s what reporters claim and they’ve taken to tweeting about the nightmarish experience all day. Whoever sent the email didn’t BCC the recipients, and a reply-all nightmare quickly unfolded. The incident quickly started trending. Here’s a recap:

Currently stuck on a reply-all chain started by Martin Shkreli, in case anyone is curious what hell looks like.

Often called “The most hated man in America,” Shkreli, the 32-year-old former hedge-fund manager, became world famous after acquiring the American rights to distribute a life-saving drug that many AIDS patients rely on. He raised the price by more than 5,000 percent, sparking an international backlash.

The mass-email reportedly claimed Shkreli would let recipients listen to a track from the Wu-Tang Clan album “Once Upon a Time in Shaolin.” Shkreli, maintaining his widely-hated persona, bought the sole copy of the album for $2 million in 2015. The email also said, “When I reach 200k followers on Twitter, I will drop another track.”

Martin Shkreli recently made the news when he claimed that Hillary Clinton has Parkinson’s disease, based only on his own observations.

Shkreli claims that he never sent the email, but if he did, it would be a pretty good publicity stunt as the story quickly trended online.

So far, the stunt has brought about mixed reactions:

BEING ON THIS MARTIN SHKRELI EMAIL CHAIN HAS CURED MY DEPRESSION

Can’t get actual work emails to load on any device because of this stupid Martin Shkreli email chain I was oddly included on. #Help

Who knows what really happened, but this tweet sums up the situation many reporters find themselves in pretty well:

TFW you’re on an email thread with 500 journalists, started by a fake Martin Shkreli, and everyone hits “reply all” pic.twitter.com/Yz5sdWHcsa

Emma Von Zeipel
Emma Von Zeipel is a staff writer at Law Street Media. She is originally from one of the islands of Stockholm, Sweden. After working for Democratic Voice of Burma in Thailand, she ended up in New York City. She has a BA in journalism from Stockholm University and is passionate about human rights, good books, horses, and European chocolate. Contact Emma at EVonZeipel@LawStreetMedia.com.
Share:
Related ItemsEmailMartin ShkreliShkreli EmailTrendingTwitterWeird News