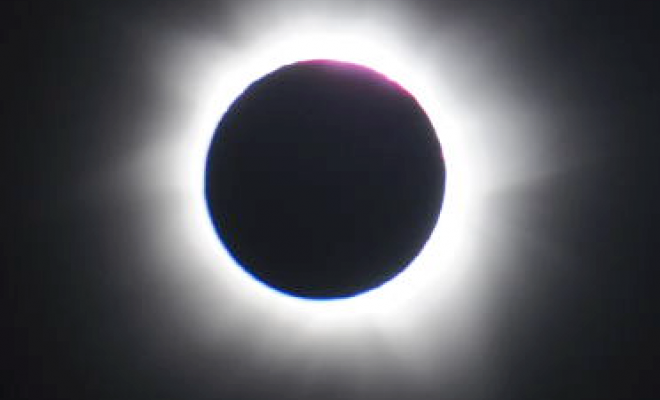 Astrologers Believe Solar Eclipse Could Signal the End of Trump

Amid what seems like constant chaos in the White House, it appears as though the next source of trouble for the Trump administration may come from celestial bodies–namely the upcoming solar eclipse–according to astrologers.

On August 21, a solar eclipse will occur that is expected to cast a 70-mile-wide shadow diagonally across the entire United States. Solar eclipses occur approximately once every 18 months, but this will be the first time since 1918 that the shadow will stretch across what is known as “the path of totality.”

While Americans are making plans to see this particularly rare event, astrologers have been analyzing the cosmic events surrounding it to discover what it means for the future. Even in present day, eclipses still hold a lot of power in astrology, according to Wade Caves, an astrological consultant who earlier in July published a 29-page analysis of the coming eclipse.

“What we’re talking about is the ability of the sun to be able to give light and life-generating heat, and all these things being momentarily taken away,” Caves told Newsweek. “So there’s this symbolism that’s built in with eclipses about…things coming to a close, and in often a very dramatic fashion.”

Astrologers are not so much intrigued by how rare this eclipse is, but rather how well the astrological activity surrounding it lines up with Trump’s chart.

The eclipse falls just before the end of the Leo sun sign, which is in a “rising” stage on Trump’s astrological chart–meaning that the president is exuding personality traits very similar to that of a typical Leo. The personality of the  average Leo tends to fall somewhere between egotistical and confident, so Trump’s zodiac sign shouldn’t come as much of a surprise. Leo is also symbolized as a lion, which is commonly used to represent rulers and kings.

As a result, Caves believes that the timing of the eclipse is a bad omen for Trump.

“It seems to me very possible that by this time next year, we’re looking at the reality of Trump not being in office,” he said.

Caves is not the only astrologer with this belief. Debra DeLeo-Moolenaar, a British astrology blogger, interprets eclipses to be “a big burst of energy” that spreads across the sign chart of a nation or person, “giving energy and power into something that’s already in play.”

She believes that growing frustrations throughout the nation may be “set off” by the solar eclipse, and that the moon symbolizes “the common people” blocking their leader–the sun.

In February, DeLeo-Moolenaar wrote that astrological charts showed Uranus, which is apparently known for being disruptive, approaching Trump’s astrological “birth planet,” Mars, during the eclipse. This, she said, indicates a potential “crisis of some sort” for the president.

Is War Written in the Stars?

Eugene Johnson, another astrologer, wrote an analysis in April of the eclipse that expanded to Jupiter, Pluto, and Neptune, and suggested that the United States should be prepared for some significant event just short of war.

“[The eclipse will] mark important developments on the world stage because of the high preponderance of outer planets involved,” Johnson added.

Astrologer Marjorie Orr noted last November that the eclipse is a part of what is known as the Saros series–which has included eclipses in 1909, 1927, 1945, 1963, 1981 and 1999. Coincidentally, significant political events occurred during each of those years, including the assassination of John F. Kennedy, the impeachment of Bill Clinton, and the death of Franklin Delano Roosevelt.

“Certainly this eclipse presages violence in one form or another,” Orr wrote.

While it may be easy to dismiss these astrologers’ conclusions as pseudoscience nonsense, it’s worth noting that there has been speculation over the use of astrology in the White House before.

Not only did Ronald Reagan experience an assassination attempt in 1981–one of the Saros series years–but he had a deep interest in astrology himself. He is said to have scheduled important meetings, presidential debates, cancer surgery, State of the Union addresses, and his 1967 inauguration as governor of California based on astrological information.

First Lady Nancy Reagan was even said to be in constant contact with an astrologer named Joan Quigley, who died in 2014 and wrote a book about her time in the White House. Considering how highly Trump regards Reagan, and some of the similarities between their presidencies, it’s possible that the eclipse is on the president’s radar.

But even so, there are those in the scientific community who come out against such predictions. Duncan Steel, an American scientist and author of “Eclipse: The Celestial Phenomenon that Changed the Course of History,” called them foolish.

“Way back, when people had little ability to predict when eclipses would occur apart from recognizing that there are distinct cycles, perhaps it is understandable that doom-mongering based on eclipses occurred,” he said in an email to Newsweek. “But for people nowadays to imagine that they are portents of doom is just daft…. If people believe that the forthcoming solar eclipse ‘means’ anything for the U.S., for Trump, for the world, then they are deluded.”

Gabe Fernandez
Gabe is an editorial intern at Law Street. He is a Peruvian-American Senior at the University of Maryland pursuing a double degree in Multiplatform Journalism and Marketing. In his free time, he can be found photographing concerts, running around the city, and supporting Manchester United. Contact Gabe at Staff@LawStreetMedia.com.
Share:
Related ItemsAstrologyScienceSolar EclipseTrumpWeird News