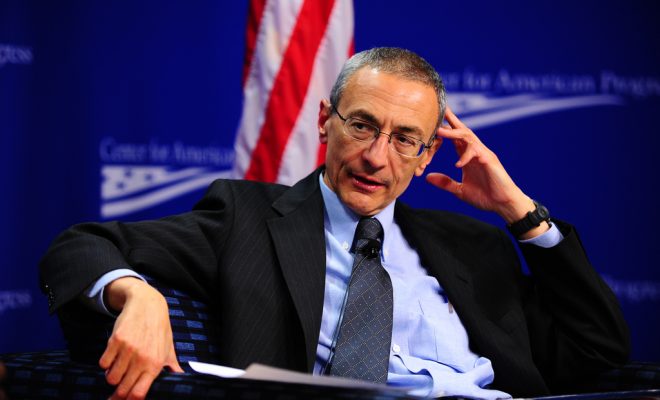 The Internet Thinks Podesta is a Satanist After Leaked #SpiritCooking Email

On Friday afternoon the internet went totally wild after finding out about one more leaked email that supposedly proved that John Podesta, and therefore the whole Clinton clan, are Satanists.

#SpiritCooking: Podesta has band-aid on middle finger, likely from a cut, just like Marina Abramovic suggest for a “Spirit Dinner” pic.twitter.com/4Edf1bdLqC

The email in question was sent to John Podesta from his brother, asking if John could join him for a dinner at artist Marina Abramovic’s place. He included the forwarded email from Abramovic, in which she described the dinner as a “Spirit Cooking”. Because of that phrasing, right wing people online got all frenzied and started sharing their best conspiracy theories. The hashtag #SpiritCooking had over 500,000 tweets by late afternoon.

It all makes sense now. The whole family is involved in this satanic cult. pic.twitter.com/KVV7FbOV6w

The most disturbing thing about the whole #SpiritCooking Scandal is that NO DEMOCRATS are condemning it! Their silence speaks volumes!!!

Wow. I just got to this video about #spiritcooking…skipping dinner this evening… https://t.co/Qahq8OGcav via @YouTube

The list of ingredients in the cookbook did call for “fresh breast milk with fresh sperm milk” to be consumed “on earthquake nights,” but the dinner she invited the Podestas to was more a normal one, with real food. “It was just a normal dinner,” she said to artnews.com on Friday afternoon. “There was no blood, no anything else. We just call things funny names, that’s all.” She told the website that John Podesta never made it to dinner and they have never met in real life. She called the right-wing attacks “absolutely outrageous and ridiculous.”

At least as President, Hellary could call the Vatican hotline & get the Pope to perforrm an exorcism #SpiritCooking

Thankfully all of this insane election mudslinging will be over soon.

Emma Von Zeipel
Emma Von Zeipel is a staff writer at Law Street Media. She is originally from one of the islands of Stockholm, Sweden. After working for Democratic Voice of Burma in Thailand, she ended up in New York City. She has a BA in journalism from Stockholm University and is passionate about human rights, good books, horses, and European chocolate. Contact Emma at EVonZeipel@LawStreetMedia.com.
Share:
Related Items2016 ElectionDemocratsHillary ClintonJohn PodestaMarina AbramovicRepublicansSatanismSpirit CookingTrending Hashtag