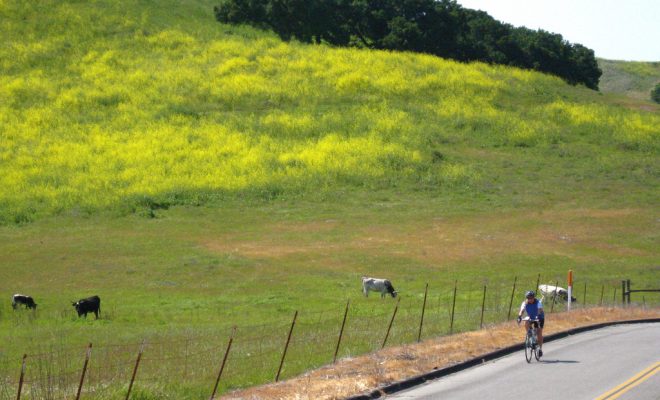 A man who works as a high school administrator is accused of intentionally hitting a cyclist with his SUV in a national park in Tennessee, and then fleeing the scene. A friend of the cyclist had a GoPro camera on his helmet and shared a video of the incident on Facebook. After that, the police were able to track down the driver, Marshall Grant Neely III.

He was released after posting an $11,500 bail, but could still face additional federal charges. Park rangers will meet with the United States Attorney’s office this week to discuss any further charges.

The chilling footage from the incident shows two cyclists biking through the Natchez Trace Parkway. The road the two were cycling is a designated bicycle route, and bikes are legally allowed to use the whole lane when necessary. In the opening seconds of the video, a white truck passes the cyclists without incident.

Soon after, a black Volvo SUV comes up from behind and hits 23-year-old cyclist Tyler Noe, who is slightly further ahead of his friend, Greg Goodman.

But the video makes it pretty obvious that the car hit him on purpose, as there were no other cars or people in sight. Neely also did not stop to check on Noe. Luckily, Noe was not seriously injured, and was taken to a nearby hospital for treatment. Noe got up on his feet after tumbling off of the bike.

NEW: According to arrest report, Marshall Neely claimed “a man & a woman were standing in the road & threw the bicycle at his car.” @WKRN pic.twitter.com/mZKopldryE

According to Goodman, a witness told him that the same Volvo SUV had tried to hit someone a week earlier as well. According to the police report, Neely claimed that a man and a woman had been standing in the road and had thrown a bicycle at his car.

Neely has worked with children since 1995. Until the accident, he served as dean of students at the University School of Nashville, a K-12 private school. The school also has a mountain biking team. Neely is the father of two USN alumni, and also reportedly has a degree in law.

Neely’s profile has been deleted from the school’s website since the incident, but the school wrote on its Facebook page that he has been placed on a leave of absence while the investigation is ongoing.

Emma Von Zeipel
Emma Von Zeipel is a staff writer at Law Street Media. She is originally from one of the islands of Stockholm, Sweden. After working for Democratic Voice of Burma in Thailand, she ended up in New York City. She has a BA in journalism from Stockholm University and is passionate about human rights, good books, horses, and European chocolate. Contact Emma at EVonZeipel@LawStreetMedia.com.
Share:
Related ItemsArrestCarsCyclistHigh SchoolHit and RunRoad RageTennessee