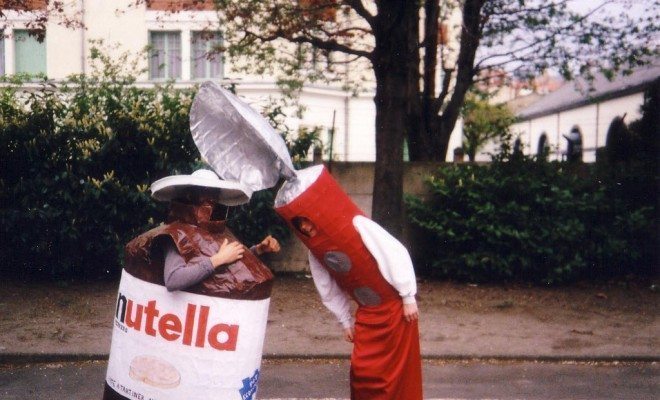 One good thing about living in the USA is that constitution-given right to freedom of speech. So, for example, I could name my child whatever I wanted (unless maybe it is something along the lines of Hitler). While this may not seem like much, it is better than what we might get in some countries–though kids who were “allowed” to be named whatever weird thing passed through their parents’ heads at naming time might not think this is a good idea, right Apple Martin? Right my sister, Novella? (Named after short novels.)

Some countries tell you what you can or cannot name your child through the use of approved lists, banned lists, etc. Or, as is the case in France, the country lets you name the kid whatever you want, but then might decide the name is not in the kid’s best interest and require a name-change.

Just ask the parents of little Nutella…er, Ella. You see, a French court recently decided that naming your child after a trademarked, chocolatety, eatable spread could cause the child to be ridiculed one day. And since all any kid needs is one more reason to be made fun of when they reach the horrible school-year ages, the court felt that this needed to be rectified. Apparently, the name was bad enough that they felt the need to rule on it. And, as you might suppose from everything I have already said, they ruled that the baby should be renamed; however, the parents of the baby decided not to show up to trial, so the court was forced to pick a new name for the kid on its own. And thus, Ella was born–the name, not the child, who had obviously already been born by this point.

This was not the only time France has banned a name. They have also overruled Fraise, or ‘strawberry’ in French. So basically, what I am getting is that French judges hate chocolate covered strawberries, if not anything that could be related to fondue–and anything that has to do with that whole fattening, if not delicious, world.

In conclusion, if you are planning on naming your child something weird, please do not birth your child in France. Or maybe do: your kid might name you parent of the year after having their name changed from Steak’n’Eggs to Stan because you were smart enough to go into labor in a place that cares so much about its citizens that it wants to get into their lives even at the naming stage.