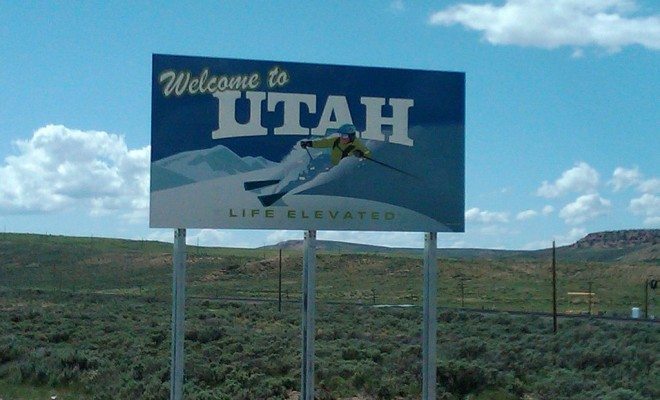 Image Courtesy of [SreeBot via Wikipedia]

The Dumbest Laws in the United States: Utah and Nevada

Nevada is home to legal prostitution and Sin City. Yet, it is surprisingly not home to many stupid laws. However, its neighbor Utah makes up for that with a whole long list of weird laws on the books.

Let’s start with Nevada. In Reno, sex toys are outlawed, and it is illegal to lie down on the sidewalk, no matter how drunk and tired you are. Apparently, at some point in the past, Reno also had issues with benches in the middle of the street, as lawmakers felt the need to ban putting them there. Other than that, most of the laws in Nevada are pretty reasonable.

Utah, however, is another story entirely. They take stupid laws to a completely new level. Many sites claim that in Utah, it is illegal NOT to drink milk. However, Utah’s Criminal Code actually states that “‘unfair discrimination’ of sections, communities, localities, cities or towns by buyers of milk, cream or butterfat constitutes an offense against public health, safety, welfare and morals.”

In Utah, animals have many laws that concern them specifically. For example, animals better be careful while on the road as they are considered traffic. Furthermore, it is legal to consume roadkill in Utah. Some sites wrongfully claim that it is illegal to fish from horseback, which is apparently not true. Utah does, however, have laws pertaining to fishing with a crossbow.

Also, if you are looking to change the weather in Utah, you’d better read into the laws there, where you need a permit to perform services as a “weather modifier.” Specifically, according to the Utah Administrative Code, this refers to “all acts undertaken to artificially distribute or create nuclei in cloud masses for the purposes of altering precipitation, cloud forms or other meteorological parameters.”

Many sites also claim that Utah outlaws whale hunting, which sounds like a perfectly reasonable law, except when you consider that Utah is a landlocked state. However, according to an article on Deseret News, Utah’s state law says no such thing. However, according to federal law, “it is unlawful for any person or vessel or other conveyance to take any species of whale incident to commercial whaling in waters subject to the jurisdiction of the United States.” So, okay, technically it IS illegal to whale hunt in Utah.

Sorry, Mike Tyson. Boxers must keep their technique in check in Utah matches, where biting is prohibited. If it saves the ears of other boxers from the likes of Tyson, I say that one is a reasonable law.

But not in Utah…

Despite not being allowed to swear, women have it relatively easy in Utah. If married women commit a crime in the presence of their husbands, the husbands can be held responsible for their wives’ actions.

One Utah law frequently listed as dumb bans individuals from causing a catastrophe. That sounds perfectly reasonable to me! This world could use a few less catastrophes. On that same note, it is illegal to detonate a nuclear weapon there. Makes sense, because doing so would almost certainly cause a catastrophe.

Due primarily to its Mormon population, the state has concocted a number of laws related to its inhabitants imbibing. In Utah, alcohol may not be sold during an emergency, and only retailers may possess beer in containers of two liters or more.

So to summarize, in Utah you’d better not try to cause a catastrophe by detonating a nuclear weapon and then try to purchase alcohol. But remember, in Reno, don’t put a bench in the middle of the road or sleep on the sidewalk.

Marisa Mostek
Marisa Mostek loves globetrotting and writing, so she is living the dream by writing while living abroad in Japan and working as an English teacher. Marisa received her undergraduate degree from the University of Colorado in Boulder and a certificate in journalism from UCLA. Contact Marisa at staff@LawStreetMedia.com.
Share:
Related ItemsDumb LawsLawsNevadaRenoUtah