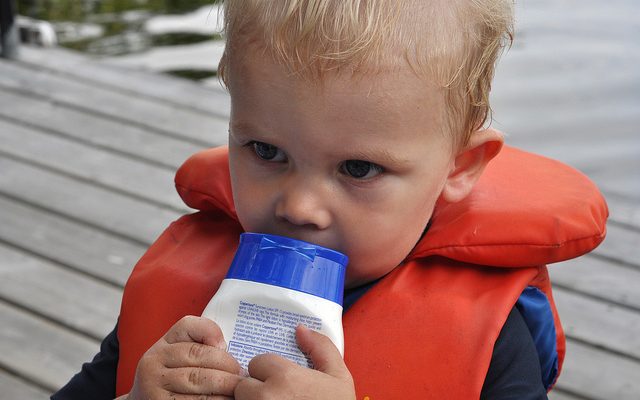 If someone offered you “drinkable sunscreen,” would you try it? Unless you’re Charlie from “It’s Always Sunny in Philadelphia,” I really hope you said no…and apparently so does the state of Iowa.

Iowa’s Attorney General has filed a consumer fraud lawsuit against the makers of two brands of drinkable sunscreen for using “seriously flawed testing” to trick consumers into buying “ordinary water at premium prices.”

Two brands of “drinkable sunscreen” have been accused of fraud by the Iowa Attorney Generalhttps://t.co/JDYsiWS5zs

AG Tom Miller named Osmosis, LLC; Harmonized Water, LCC; and their joint owner Benjamin Taylor Johnson in the lawsuit. Both companies have advertised their enhanced water as the “world’s first drinkable sunscreen.” The UV neutralizer is said to contain a form of radio frequencies called scalar waves that when ingested “vibrate above the skin to neutralize UVA and UVB, creating protection comparable to an SPF 30.”

“It’s flat-out dangerous to consumers to make them think without any proof that this water protects them from what we know is proven–potentially cancer-causing exposure to the sun,” reiterated Miller in a statement on Tuesday.

Each bottle of the “harmonized water” retails somewhere between $30-$40, and the company claims it has only sold 35 bottles of the UV neutralizer in Iowa in the five years it has been for sale.

Miller also called “BS” on Johnson’s so-called mosquito repellant, Harmonized H2O Mosquito, and its anti-bug “vibrating shield”–admittedly, like his other products, its only listed ingredient is “frequency-enhanced” water.

And then there’s Johnson’s past run ins with the law. Even though he frequently references his medical degree in promotional advertisements, Johnson lost his license to practice medicine in Colorado in 2001 after two patients complained to the Colorado Medical Board about his laser hair removal services, according to the lawsuit.

He was previously reprimanded by the board in 1999 for selling Viagra online without providing any sort of physical exam, according to medical board documents reviewed by BuzzFeed News. He does, however, still hold a medical license in California.

Johnson defended his products in a statement to Buzzfeed, writing:

I think it is important to note that we have been selling this remarkable product for about 5 years. We have had thousands of re-orders. Surely people understand that as a successful skincare company it would make no sense that we would sell people a fake sun protection water….and if we did, how long does one think those sales would last?

Even so, the attorney general’s office says the seller failed to provide a reasonable basis for the benefits touted by the products, a requirement under Iowa law.

“It’s bad enough when a consumer wastes money on a product that doesn’t work,” Miller said. “But it’s much worse when someone relies on a product to prevent serious harm, and it just doesn’t deliver.”

Alexis Evans
Alexis Evans is an Assistant Editor at Law Street and a Buckeye State native. She has a Bachelor’s Degree in Journalism and a minor in Business from Ohio University. Contact Alexis at aevans@LawStreetMedia.com.
Share:
Related ItemsConsumer FraudDrinkable SunscreenHarmonized WaterIowaLawsuitPseudoscience