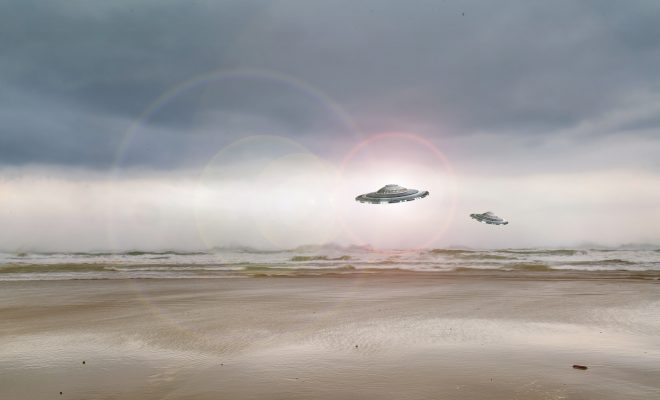 Last week, a Brazilian man went missing. And as pictures and details from his home have surfaced, it has become clear that this is no ordinary case. Investigators found the walls in Bruno Borges’s apartment covered in code that has been described as “Da Vinci Code”-style writing and satanic signs. Some of the passages are taken from the Bible and there are also quotes from the actual Leonardo da Vinci. And to top it all off, Borges was apparently obsessed with aliens.

The 24-year-old psychology student disappeared from his family home in Rio Branco in Brazil on March 27. A video that was posted by Brazilian news outlet Globo shows that most of the furniture has been removed, and the walls of his large bedroom are covered in writing. There is also a painted portrait of Borges with an alien and a statue of the Italian 16th-century philosopher Giordano Bruno.

Bruno was one of the first documented historical figures to believe that extraterrestrial life exists on other planets. Even though he was a Christian, he thought it was completely possible that there are more planets like ours with aliens that worship their own alien versions of Jesus. Bruno published his theory in a 1584 book and he was burned at the stake in 1600.

The case of Bruno Borges and the odd room he left behind is riveting to me!!https://t.co/8FRte5jqia

According to his family, he was working on 14 books, which he planned to publish. He claimed he was completing the work that Giordano Bruno had begun over 500 years ago. His family reports that he had asked them for money, but wouldn’t tell them much about the books, just that they would “change humanity.” His sister said that he recently locked himself in his bedroom for a month when their parents were out of town.

A Brazilian computer expert tried to decode some of the writings, and one part said, “It is easy to accept what you have been taught since childhood and what is wrong. It is difficult, as an adult to understand that you were wrongly taught what you suspected was correct since you were a child.”

While Borges likely suffered from some sort of mental illness, people on social media had lots of crazy theories about what happened. Some thought aliens had come to collect him. Other theorized that Borges is a reincarnation of Bruno, hellbent on finishing the work he began.

Some thought Dan Brown might have something to do with this.

@AuthorDanBrown Do you know about the disappearance of Bruno Borges? It’s very similar to the type of books you wrote

And some were just amazed that this story is real.

Most insane shit ever

Emma Von Zeipel
Emma Von Zeipel is a staff writer at Law Street Media. She is originally from one of the islands of Stockholm, Sweden. After working for Democratic Voice of Burma in Thailand, she ended up in New York City. She has a BA in journalism from Stockholm University and is passionate about human rights, good books, horses, and European chocolate. Contact Emma at EVonZeipel@LawStreetMedia.com.
Share:
Related ItemsAlienBrazilBruno BorgesCodeDa Vinci CodeDisappearSatanism