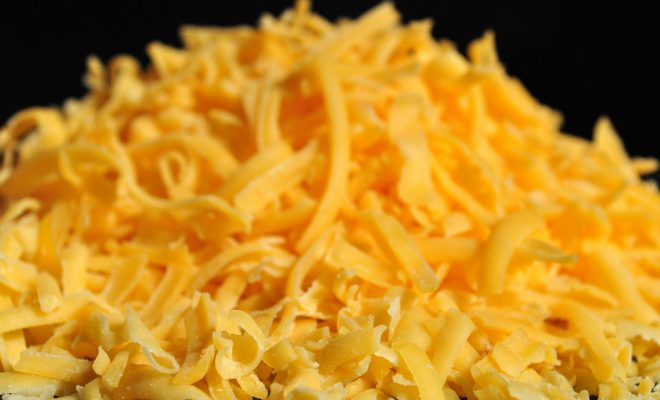 What Is America Going To Do With 1.2 Billion Pounds Of Surplus Cheese?

The U.S. has a humongous surplus of cheese. So big that every man, woman, and child in the country would have to grab an extra three pounds and finish that before the end of the year to work through it. The 1.2 billion pounds of cheese sitting in storage are not even the issue. Surplus meat, poultry, milk, and other dairy products are flooding the food market.

The glut of cheese on the shelves has caused prices to drop, which is great for most of us consumers who love a good block of cheddar or ball of mozzarella, but not so great for the dairy farmers. The revenue from dairy sales has dropped 35 percent over the past two years, causing the USDA to announce it will spend $20 million on purchasing surplus cheese to help farmers out.

So why this huge agriculture surplus? Two years ago the international market was hot and prices high. Due to an excess amount of grains on the market, farmers felt confident in buying more cattle since the feed was really cheap. Production of meat and dairy products skyrocketed but unfortunately coincided with the rising value of the dollar. So international buyers were deterred from buying American products, which caused the products to pile up, and the prices to go down.

Some farmers can’t even get rid of the milk by giving it away but have to dump it in lakes–as much as tens of millions of gallons, according to the Wall Street Journal. Sadly many farms are also going out of business. In California alone, 53 dairy farms closed down during the first half of the year.

The U.S. government has a long history of supporting local farmers when prices collapse, by buying a ton of dairy products and simply putting them somewhere else. This program was abandoned in 2012 but now the USDA buys food and donates it to food banks, which could at least help the farmers a little bit. The USDA also has paid 11.2 million to the Dairy Margin Protection Program, a type of subsidized insurance for dairy farmers.

Environmentalists and others have criticized the USDA’s measures, saying it is wasteful and financially not durable. Governments purchasing excess products just to throw them away might affect the economic market in negative ways, even if it is a small contribution. What is the point of letting that much food go to waste when there obviously is not that high of a demand for it?

But one other reason for the diary glut is that adults are not really made to drink milk. Humans are the only species that can drink milk in adulthood, but many of us still struggle with that, since our bodies are not made to digest the sugar in it. Scientists say it is a weird and unnatural genetic adaptation that allows some of us to tolerate lactose.

There’s also the environmental argument that cows produce methane, which is actually a huge contributor to global warming, so the government should not be encouraging raising more cows and making the situation worse. “It’s outrageous that the government continues to prop up the dairy industry and the wasteful pollution caused by year after year of surplus,” said Stephanie Feldstein from Center for Biological Diversity in a statement.

Clearly dairy farmers have another view on the whole controversy. Overall, milk drinking has declined in the country lately for various reasons, so the future is looking tough for the dairy farms. Unless America takes after the French and starts eating cheese with every meal…and would that really be a bad thing?

Emma Von Zeipel
Emma Von Zeipel is a staff writer at Law Street Media. She is originally from one of the islands of Stockholm, Sweden. After working for Democratic Voice of Burma in Thailand, she ended up in New York City. She has a BA in journalism from Stockholm University and is passionate about human rights, good books, horses, and European chocolate. Contact Emma at EVonZeipel@LawStreetMedia.com.
Share:
Related ItemsCheeseCheese SurplusDairyDairy FarmsFarmsFoodMilkUSDA